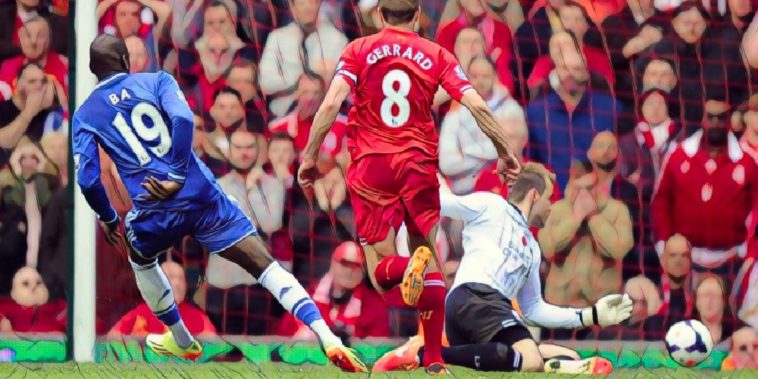 Demba Ba has offered an insight into life working under Jose Mourinho at Chelsea, while also discussing that infamous against Liverpool.

Having scored 29 Premier League goals in just 54 games for Newcastle United, as well as previously netting seven in 12 for West Ham, the now-retired striker made the switch to Stamford Bridge in January 2013, going on to score 14 goals in all competitions in his 18-month stint with the club.

While perhaps not the most prolific period of his career, the move did see the Senegal international link up with enigmatic manager Jose Mourinho, with the current Roma boss having returned to west London for a second spell in charge in 2013.

Speaking about the former Chelsea manager, the 36-year-old shed light on the Portuguese’s mind games behind closed doors, as well as his relentless desire to win.

“A real character,” Ba told The Athletic. “He would use any means to win. Any means.

“He uses a lot of psychology on players, to see who are the strong characters. One day he told us: ‘If you have a confidence problem, that’s your problem.’

“I think the players he originally had — Frank Lampard, Didier Drogba, Michael Ballack — were tough guys. They responded well to that kind of management. The younger generation need more encouragement and support. Their self-esteem isn’t built up as much. They’re affected by social media and other things, they might not respond to pressure that well.

“But Jose is the kind of guy who throws a bomb into the dressing room and sees who comes out alive.

“At Chelsea, it was like, which mask is he going to put on today? Will he be the happy one, the sarcastic one, the sad one, the angry one? At a point, you don’t mind anymore because you know, he’s just playing with you. He plays the game very well.

“Is he really like this? I don’t know. I hope that in my process of learning about the game, I’ll have an opportunity to meet him again. Did he give me a hard time? No, he didn’t. He didn’t give me anything, because I never played!”

Arguably the most memorable outing for the striker in a Blues shirt came in a clash with Liverpool at Anfield in April 2014, as he capitalised on a Steven Gerrard slip to score the opener for his side, with Mourinho’s men going on to win 2-0 all-but end their opponents title hopes.

“I remember Jose saying: ‘They think we’re a Mickey Mouse team! But we will show them!’ And we went out fighting.

“I was up against Martin (Skrtel) and Mama (Mamadou Sakho) and I played an unbelievable game. I felt like I did at Newcastle. This was the game that changed Jose’s view of me, I think.”

Despite Mourinho’s memorable celebrations after the victory, Ba insisted that his side he ‘didn’t enjoy’ playing a part in ending the Reds hopes of securing a first Premier League.

“I only realised how big a deal that was a couple of years later, when people still talked about it. They still talk about!” he said. “It was traumatic for them. But we didn’t enjoy the fact that we killed their dream, we simply enjoyed winning.

“You make errors and others take advantage. What Steven Gerrard has done for the world of football is tremendous. But this is life, unfortunately. Not all stories can end in fairytales.”