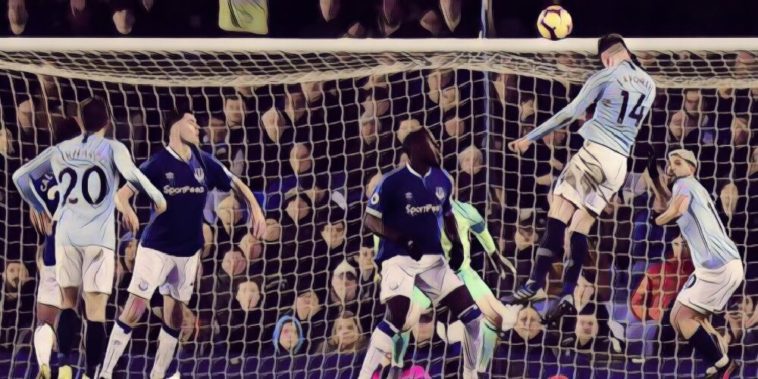 Dominic Calvert-Lewin thinks Everton should be proud of their performance, despite slipping to a 2-0 defeat against Manchester City in the rescheduled Premier League game this evening.

It was a strange atmosphere at Goodison Park, with the Everton faithful knowing that a win for their beloved Toffees would hand their bitter rivals, Liverpool, a huge advantage in the title race.

However, the hosts – who made five changes from the weekend defeat to Wolves – put in a spirited display, with the likes of Tom Davies, Idrissa Gueye and Dominic Calvert-Lewin catching the eye with dynamic performances.

Despite all their good work though, it would be the Blues inability to defend set pieces that would be costly once again, as Aymeric Laporte rose unmarked in first-half stoppage time to give the Champions the lead.

Substitute Gabriel Jesus confirmed City’s return to the top of the table in the 97th minute, nodding in from close range after his initial effort had been saved by Jordan Pickford.

Speaking after the game, Everton forward Dominic Calvert-Lewin said that while he was disappointed to come away from the game with nothing, the team should be proud of their efforts in what was a much-improved display.

“It’s very disappointing, we worked so hard to get a result but it’s a lapse in concentration again at the end of the first half. There’s no hiding place, we’ve conceded a few from set pieces and we are working hard to get it right. We’ll turn it around,” the 21-year-old told the BBC.

“We have to be proud of ourselves, every one to a man put in a good shift. That’s not enough sometimes you have to show quality but you saw from the reaction from the fans at the end they are happy with that.

“It hasn’t always been the case this season. It was important to get the fans behind us again, it gives us a lift. It’s a difficult period, results aren’t going our way. It’s down to us to put it right.”