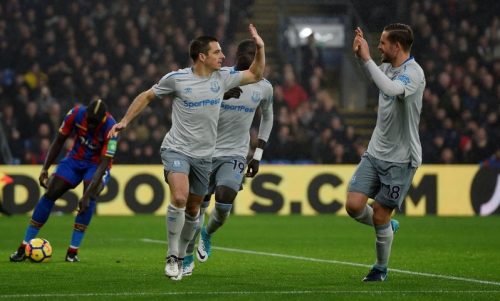 It was another poor away day for Everton as Palace fail to capitalise, leaving the Eagles rooted to the bottom of the Premier League. Here are five things we learned.

There is a lot of talk about Everton being a relegation threatened team this season and their form on the road certainly doesn’t help that. Coming into this game their last away win, incredibly, came against Palace in a 1-0 win for the Blues back in January of last season.

Since then, the stats make pretty grim reading as Everton have embarked on a 10-month winless run, losing seven and drawing seven of their last 14 away games. It was hoped that Unsworth would be able to change that, but his away record in all competitions currently stands at three defeats and one draw, with three of the four being uninspiring performances.

Everton cannot rely on home games if they want to push themselves up the table and with an out of form Southampton coming up next, away from Goodison Park, Everton have the perfect chance to end their away day blues.

Palace fail to capitalise on another good performance

Despite the fact that Palace are bottom of the table this was never going to be an easy game for Everton. The Eagles have improved a lot performance wise under new manager Roy Hodgson as he looks to push them up the table.

So far under his management Palace have beaten Chelsea, come from two goals down to rescue a point against West Ham and were extremely unlucky not to get something against Newcastle and Tottenham, away from home.

However, just like in the Tottenham game; Palace failed to get the result they deserved based on the performance in the game against Everton. If Palace don’t want to be left behind then they need to find a way to win games and yesterday’s draw against Everton was certainly two points dropped for Hodgson’s men. Something that is sounding familiar for Palace recently.

Niasse started just his third Premier League game of the season for the Blues against Palace. Three more than anyone would have predicted at the beginning of the season.

Niasse’s importance shouldn’t be understated in this game. He won the penalty, under questionable circumstances, that got Everton back into the game and then scored Everton’s second equaliser with a nice cool finish into the keepers bottom left hand corner.

That now takes Niasse’s Premier League tally to five goals so far this season, and he currently has a better minutes per goal ratio then players such as Aguero, Morata and ex-Everton star Lukaku. He has also only scored one less goal than Harry Kane in the league since September 23rd – the date of Niasse’s first league game.

Niasse is not the most talented of individuals, but as the saying goes: “Hard work beats talent when talent doesn’t work hard.”

Everton need a plumber to fix their leak…of goals

Going into the game against Palace the stats looked promising for Everton. In their previous four away games against the South London side the blues hadn’t conceded a goal. One minute in to yesterdays game and Everton were one nil down.

It was hoped that the transfer of Michael Keane would help sure up the Everton defence this season, however, he has looked a shadow of the player who played for Burnley last season.

After Saturday’s result, the Blues have now conceded two or more goals in seven consecutive games in all competitions. This is their longest run since 1994 when it stood at nine consecutive games. The Toffees have now also conceded 24 goals so far this season, this is the same amount as bottom side Palace and the joint second highest in the league.

Unsworth, or whoever is next in charge of Everton in the coming days needs to find a way to address Everton’s defensive problems. Otherwise, the Blues will not be going up the table.

Palace in danger of being cut adrift

The team above West Brom in 16th are Everton on 12 points meaning Palace are already seven points away from the team just four places above them. With rumours about Tony Pulis’s future and Everton looking to appoint a new permanent manager, Palace have got to be weary of them teams benefitting from a boost from the new manager which could leave them even further behind.

Next up for Palace is Stoke City who aren’t currently having the best of seasons themselves. With this game being at home it is a definite must win for the Eagles. The importance of it is shown in that they are unlikely to even move up the table should they win due to the goal difference of them and Swansea. Only wins can put that right.