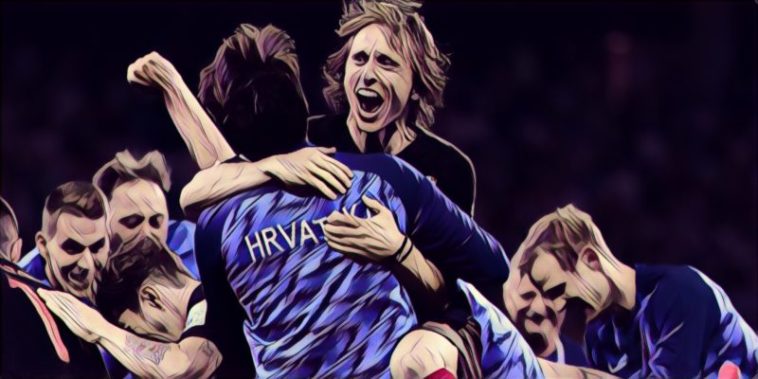 The Croatian National Team is just one winnable quarter-final match away from their second World Cup Semi Final appearance.

Their tense shoot-out victory over Denmark in their last 16 tie ensured that their talented group stays in contention in Russia.  There is however, a lot more to their progress and true abundance of quality players than sheer audacity and underdog spirit.

Croatia’s rise to football big time has come from treading a painful route through some awful history. The players of their golden generation stand as the embodiment of how those tough, painful formative years can create truly driven and fiercely determined players. It’s a lesson that all international sides could learn from.

Refugees of war and true poverty

The current Croatian squad boasts players from Real Madrid, Barcelona, Liverpool, Monaco, Inter Milan and Juventus.  The likes of Modric, Rakitic and Mandzukic could walk into just about any club side in the world on top form. The likes of Perisic and Lovren, though inconsistent, are quality players on their day.

This plethora of talent from a nation of less than five million people is reminiscent of the quality sides assembled by The Netherlands and more recently, Belgium. The current Croatian crop though has been forged in a much tougher and demanding environment than the economic and peaceful comfort of Western Europe.

Luka Modric, Mario Mandzukic and Dejan Lovren had to suffer significant trauma in their early lives as their families fled the war which engulfed the Balkans in the early nineties. Modric had to suffer the heartbreak of his grandfather’s murder in cold blood as violence spread like contagion throughout the former Soviet Satellite nations. Lovren’s uncle was murdered and Mandzukic grew up with classmate’s whose father’s were being killed in the civil conflict.

All three saw their families uprooted as they fled in fear of their safety. Lovren’s family had to flee the Bosnian village he was raised in, just outside of Zenica. His powerful story told in a recent documentary; is worth investing some time in.  His family ended up driving to Germany where they had some connections.

However, as the appalling conflict subsided in his homeland, his family was no longer viable for asylum and sent back to the region. His family endured years of terrible poverty upon their return. The young Lovren found his prized possessions such as his cherished ski boots, being sold to help the family pay their bills.

Lovren’s interview to LFC TV was truly moving, and the player himself still obviously bears some mental scars of that era:

“…but it was in these small villages where the most horrific things happened …people being brutally killed. My uncle’s brother was killed in front of other people with a knife. I never talk about my uncle because it’s quite a tough thing to talk about, but he lost his brother, one of my family members. Difficult …”

Ivan Perisic too, had to ensure similar poverty as his family scraped a living as chicken farmers in rural Croatia.

Modric and Mandzukic also faced displacement and uncertainty away from their childhood homes. Modric would often be seen kicking a ball around the hotel car park where his family had to stay as their surrounding countryside became pockmarked by landmines and snipers.

It is no surprise then, that these players have risen so far, so fast.  Modric survived rejection for being too small, to go on and play for a wonderful Real Madrid side. His international colleagues have gone on to consistently punch above their weight, no doubt fueled on by their recent memories of poverty and adversity.

Now there is nothing new about a footballer’s background being used as their inspiration for future greatness in the game.  African born players and South American youngsters are often spurred on by the poverty and adversity they have escaped. It gives players an extra gear of determination and fight, two of the most important qualities for any footballer.

What is fascinating and inspiring about Croatia though, is their core group of players have all come through adversity together.  They will have a collective memory of those traumatic and painful formative years in the Balkans. Together they have come through the ranks and played with each other for a decent chunk of time. The scenes at the end of their win over Denmark, showed their collective solidarity and pride. It was truly inspiring to see.

For a nation which has only been eligible for play in the World Cup since 1998, they have done remarkably well. Finishing third in 1998, they won a lot of hearts with their gutsy, expansive football inspired by Davor Suker. Since then, they have only failed to qualify once and have won ten matches in the competition. They have also reached the knockouts of the Euros three times since 1996, again, with a commitment to playing decent football.

The nation has emerged from the shadows of the former Yogoslav Communist State, and the subsequent wars that tore the Balkans apart. It is now a stable and confident country of which the national football team is a proud beacon.

Should they beat Russia and reach the semi-finals of the World Cup, they will have equalled the number of appearances in the final four by much larger and powerful football nations like Spain and England. This is a truly staggering achievement when you consider similar sized European nations like The Netherlands are not even at the competition.

The current set up in Croatia has not gone unnoticed by the bigger leagues in Europe. The likes of Pasalic, Vlasic, Rog and Sosa, find themselves in the Premier league, Seria A and the Bundesliga respectively. There is a hunger from the Croation big boys like Dynamo Zagreb and Hadjuk Split to get their current crop in as young as possible and blood them early.

With the current saturation of scouts operating in Europe, there is obvious financial incentive from the Croatian clubs. In addition, to have so many decent youngsters coming through is a show that the guardians of the game in the Balkan nation have their fingers on the pulse and are reading it correctly.

The way forward for any successful football nation is youth, and with Croatia currently getting this message, don’t bet against them making it to the latter stages again in the future, with their next golden generation.