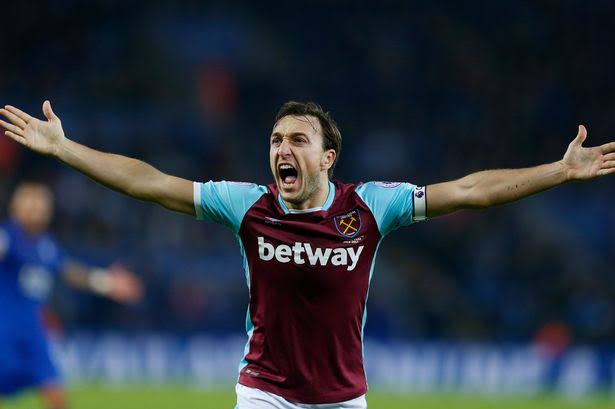 Criticism of West Ham United captain Mark Noble’s recent performances has been growing in recent weeks. Saturday’s disappointing 3-2 defeat at Bournemouth seems to have been the catalyst for a spectacular outpouring of broadsides on social media.

Fans on numerous forums started berating Noble because of his apparent lack of current form. There were also calls for Slaven Bilic to drop him from the first team, immediately.

Those that have attended this season’s matches, especially at the London Stadium, will not be surprised by this criticism. Results have not been as good as many fans expected and Noble is seen by many supporters as one of the main culprits.

Some supporters see him as a player that loses the ball easily in midfield, and passes sideways and backwards too often. He is also viewed in many circles as the manager’s favourite. A player that never gets dropped, even when his form is questionable.

But does this criticism stack up? West Ham are not doing as well as last season, but is this all down to the captain. A number of players could be at fault. Is Noble playing worse than last season?

According to match-by-match statistics for last season, Noble had a pass accuracy rate of 86%, while this season that rate has actually gone up to 87%, of which 72% have been forward passes.

Admittedly, the season is not yet over, but those statistics point to the fact that West Ham’s captain is playing as well as he did last season.

The only dip in his form has been goal-scoring, which has never really been his strong point. This season he has managed only three goals so far, against a total of seven for 2015-16.

Whether Bilic drops Noble for this Saturday’s game against Leicester City remains to be seen. However, it seems unlikely, as he has featured in all but two of the Hammers’ Premier League games this season.

Speaking to the press this week, Noble is reported to have said he can handle the pressure of criticism from some sections of the club’s fan-base.

He is fast approaching 400 appearances for the club and is adamant that he is experienced enough to cope with these negative opinions.

It does seem, however, that the pressure is getting to him as he also reportedly said: “If I am really honest, a lot of people who now go to football don’t really understand the game.

“Football is a game of moments now and if someone does four step-overs, they’ve had an incredible game. That’s not something I do.”

Quite right! That is something no-one does at West Ham, not since Dimitri Payet left in January. But to say many supporters do not understand the game is wrong.

This is an old cliché that goes around, that only those that have played the game at the highest level truly understand the sport.

This is a false claim, and a case in point is Jose Mourinho, who never played at the highest level, but has had a highly successful career in football management.

If Noble persists in making such claims, he risks alienating himself and consequently he will get even more criticism from the fans.

What he needs to do, if he is picked on Saturday, is to keep passing the ball accurately and forwards, and help West Ham beat Leicester.