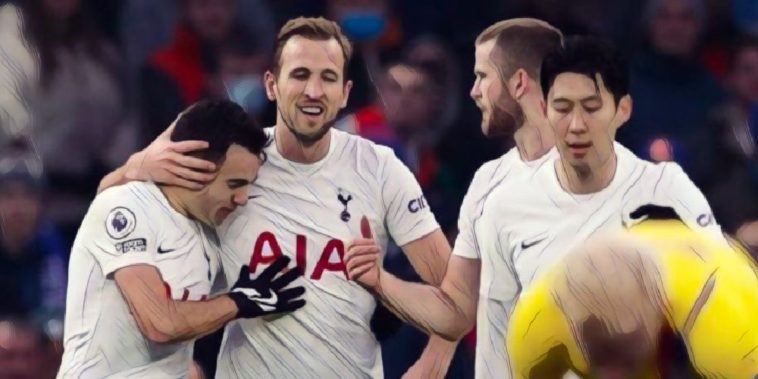 Tottenham continued their recent upturn in form under Antonio Conte as they ran out comfortable 3-0 winners in a Boxing Day North v South London derby.

Crystal Palace came into the game without a number of first-team regulars following a Covid outbreak at the club, with the Premier League having rejected the club’s request to postpone the game.

Both sides seemed to lack a bit of quality in the final third of the pitch in the opening half-an-hour before the game sprung to life in what was an action-packed five minutes.

Fresh off the back of his strike against Liverpool, Harry Kane would open the scoring as he netted his third league goal of the season in the 32nd minute, stroking home Lucas Moura’s cross with a first-time finish beyond Jack Butland.

Moura would net Spurs’ second two minutes later, initially moving the ball on to Kane who in turn found the rampaging Emerson Royal down the right, before the Brazilian full-back picked out his compatriot who headed home from close range.

Palace’s misery would be compounded three minutes later as talisman Wilfried Zaha was shown a second yellow card within just 11 minutes, a daft push on Davinson Sanchez earning the Ivorian an early bath.

Down to 10 men, Palace really struggled to get onto the ball, and Spurs extended their lead with 16 minutes to play as Heung Min Son flicked home a cross from the influential Lucas Moura.

While Hugo Lloris had to be in fine form for the midweek Carabao Cup win over West Ham, the World Cup winner will have rarely have had easier outings than this, with the Eagles failing to get a single shot on target throughout.

Speaking afterwards, Antonio Conte was pleased with his side’s focus and attitude after Palace had been reduced to 10 men, saying his side put in ‘a good performance’.

“It was three important points.” he told Premier League productions. “We started a bit slow but then we got chances to score and we scored the first and second goals and to play against 10 men was easier for us.

“But sometimes despite this it happens against 10 men that I have lost in my career and the focus and attention of my players and attitude was good. It was a good performance. The most important thing now is to recover well because in two days we have a very difficult game against Southampton.

“There is a lot of space for improvement. To keep the clean sheet is always important but at the same time to score three goals was positive for our strikers. There were a lot of positive things after this game but in two days everything can change.

“I tried to give a rest to Harry [Kane] and Son [Heung-min], especially Harry because he plays every game but he is such an important player it is difficult to think about keeping him on the bench.”