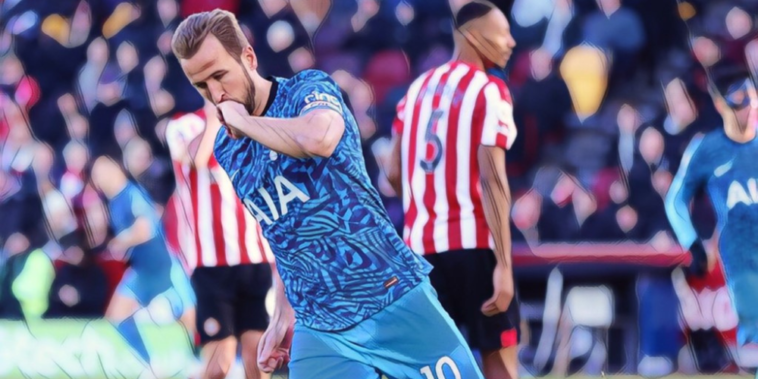 Antonio Conte discussed his frustration with Tottenham’s slow starts after his side were held to a 2-2 draw at Brentford.

Spurs fought back from two goals down to earn a draw at Brentford, with the north Londoners recovering from a poor first-half performance to rescue a point.

Conte’s team have been plagued by slow starts in recent fixtures, conceding the first goal in their last nine games across all competitions.

Brentford had the better of the opening exchanges and the Bees struck first as Vitaly Janelt turned in a rebound from close range.

Thomas Frank’s side doubled their advantage nine minutes after the break, as Brentford again showed their set-piece threat. Ivan Toney – playing in his first game since his FA charge for alleged betting breaches – turned in unmarked for his 11th league goal of the campaign after Christian Norgaard flicked on a corner kick.

Spurs responded and pulled one back in the 65th minute as Harry Kane met Clement Lenglet’s cross with a brilliant header past David Raya. Six minutes later, Pierre-Emile Hojbjerg levelled the score and Spurs came closest to a winner as Kane headed against the crossbar.

The drama of the Premier League. Good to have you back! 😍

Conte was pleased that his side showed character to fight back and earn a point, but said that Spurs must begin games with the same intensity.

“For the people that today watched the game that are not watching Tottenham for the first time it’s another exciting game,” he told his post-match press conference.

“On one side I have to be happy because of the way we played in the second half, the energy, desire and intensity and when you play like this you create problems.

“On the other side this is now nine games in a row we have conceded the first goal. It’s important to be stable for a team that wants to try and stay in a good position in the table. We have to find solutions.

“For me this is the first time in my career to concede nine games in a row. They showed great character but we have to start in this way. Brentford are a difficult team and they drew against Chelsea, beat Manchester City. It’s not easy to press them because they can hit it long and Ivan Toney is very good. I want to underline how good they are but we could have won.”

Spurs’ fightback denied Brentford a first win over their London rivals since 1948 and leaves the club fourth in the Premier League table. Brentford climb to ninth after a fourth Premier League game without defeat.