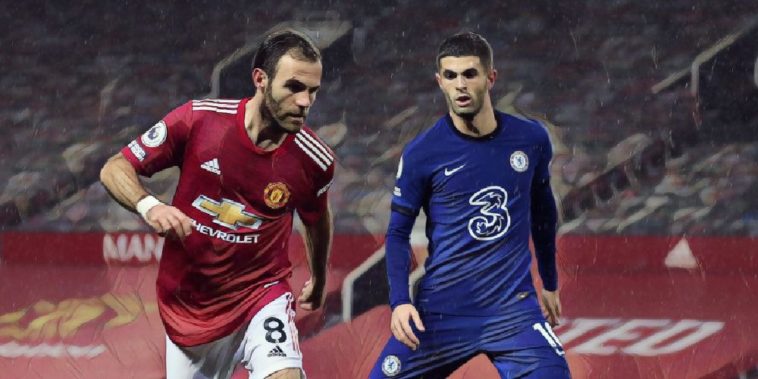 Chelsea host Manchester United on Sunday in the Premier League, the hosts looking to extend their unbeaten run under new boss Thomas Tuchel.

Here’s all you need to know about this potentially pivotal meeting at Stamford Bridge:

It’s still early days in the Thomas Tuchel reign, yet the performances so far would suggest that improvements have already been made under the German, even if the Blues aren’t quite firing on all cylinders just yet.

In truth, it’s all been fairly steady since he replaced Frank Lampard at the end of January, yet eight games into his tenure and Chelsea remain unbeaten, while also having conceded just twice.

After the disappointment of dropping points away to Southampton at the weekend, the Blues bounced back with a crucial away win over Atletico Madrid on Tuesday night, a sensational Olivier Giroud overhead kick enough to give his side the win over the La Liga leaders.

At a time when the likes of Timo Werner, Hakim Ziyech, Christian Pulisic, Kai Havertz and Tammy Abraham are all struggling for form and fitness, the presence of the evergreen, ever-reliable Giroud is vitally important heading into the pivotal final third of the season.

That game against Diego Simeone’ side also saw Callum Hudson-Odoi handed a starting berth, despite having been subbed off after just 30 minutes at the weekend, the 20-year-old once again impressing in an unfamiliar wing-back role.

As for Sunday’s game, Tuchel be sweating over the fitness of veteran centre-back Thiago Silva, the defender having been absent since the 1-0 win over Tottenham at the start of February.

After a stuttering run of results of late, the past week has seen a welcome return to form for United, after a convincing win over Real Sociedad in the Europa League, followed by a much-need home win against Newcastle United.

That 3-1 win saw James put in another promising display after his recent return to the starting lineup, although it’s teammate Fernandes who continues to steal the headlines, his goal and assist against the Magpies making it a staggering 54 goal contributions in all competitions since he made his debut for the club.

Most goals + assists in the Premier League this season:

The Portugal international has bailed his side out of trouble so often this season, yet still needs to put in a big performance against another top-six side to really be considered one of the best in the league, the game at Stamford Bridge the perfect way to end his ‘big six’ troubles.

Solskjaer’ side are yet to beat any of their ‘big six’ rivals this season, with their games against Manchester City, Liverpool, Arsenal and the previous meeting with Chelsea all ending in drab goalless draws.

While the Red Devils will be looking to put that right at the weekend, they will have to do so without Paul Pogba who remains out with injury, while Edinson Cavani, Scott McTominay and Donny Van de Beek are also doubts.

Those three man were absent from United’s goalless draw with Real Sociedad in the Europa League on Thursday night, as Solskjaer’s men comfortably progressed to the last-16, courtesy of their first-leg 4-0 win.

Both supporters and neutrals will be hoping for a much more exciting game than the one that took place earlier this season at Old Trafford.

United went into the game having lost their opening two home games and looked particularly scarred by the 6-1 hammering at the hands of Tottenham, while Chelsea’s defensive woes had been exposed by the likes of West Brom and Southampton in the early weeks of the season.

That invariably lead to both sides looking somewhat fearful and neither side really appearing desperate to win, as has been the case in many of the ‘big six’ clashes this season.

In truth, the game’s major story was VAR’s decision not to award a penalty to the visitors inside the first-half, after Harry Maguire looked to have man-handled Cesar Azpiliceuta in the box. Debutant Edinson Cavani also nearly scored with his first touch, yet his header fired into the side netting.