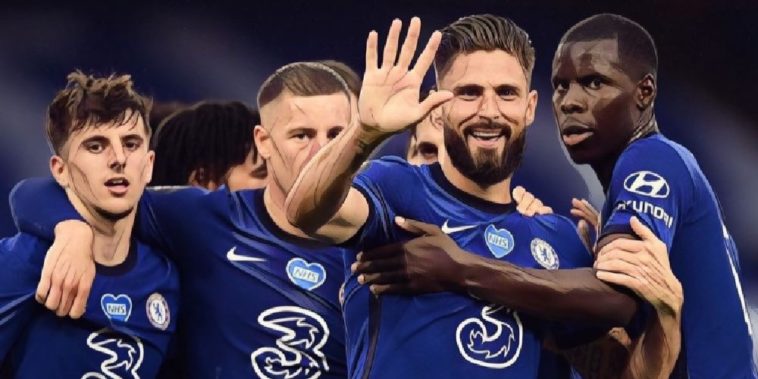 The race for Champions League football has become one of the most fascinating stories of the season since the Premier League’s restart, and Chelsea staked their claim with a comfortable 3-0 win over Watford on Saturday evening.

Having slipped to a disappointing 3-2 defeat against West Ham last time out, Frank Lampard’s side started well and dominated the opening exchanges at Stamford Bridge, and they duly took the lead midway through the first half.

Ross Barkley found a pocket of space in between the Watford lines, before playing a perfectly weighted ball through to Olivier Giroud, whose first-time finish across Ben Foster’s goal expertly found the bottom corner – the Frenchman’s fourth goal in his last seven league appearances.

Chelsea continued to dominate, and two minutes before the break they were handed a chance to double their advantage from the penalty spot, Etienne Capoue steaming into American attacker Christian Pulisic who was on a driving run into the box, with Willian stepping up to dispatch his third spot-kick, and fourth goal since the restart.

While the hosts were in control for the vast majority of the game, Watford did manage to squander a number of chances to pull a goal back, with former Man Utd and Arsenal forward Danny Welbeck offering added attacking impetus for Nigel Pearson’s struggling side having come off the bench.

However, Chelsea made certain of the points in second-half stoppage time, Ross Barkley smartly firing home with his left foot from inside the box.

Speaking to Sky Sports after the game, Frank Lampard was pleased with how his side broke down Watford’s low block, while admitting it was a ‘comfortable evening’.

“Clean sheet at home and three goals,” the former midfielder said. “He played some nice stuff. It’s difficult against the low block sometimes and the way we broke it down was good.

“We could have been better in the second half with our passes but we defended the set-pieces really well. It was a comfortable evening for us.

“When you have two players in those advanced midfield positions against Watford, you have to get players behind their midfield.

“Mason Mount’s pass is wrapped through the front line [in the build-up to the first goal]. I like working with [players in] that position because it’s where I played and its important we have quality in that area to unlock the door.”

The win moves Chelsea back into the top four following Leicester and Manchester United’s wins earlier in the day, with a trip across London to face Crystal Palace on Tuesday evening next up for Frank Lampard’s side.

Watford meanwhile remain one point ahead of the drop zone with five games to play, with 18th placed Aston Villa set to play champions Liverpool on Sunday.