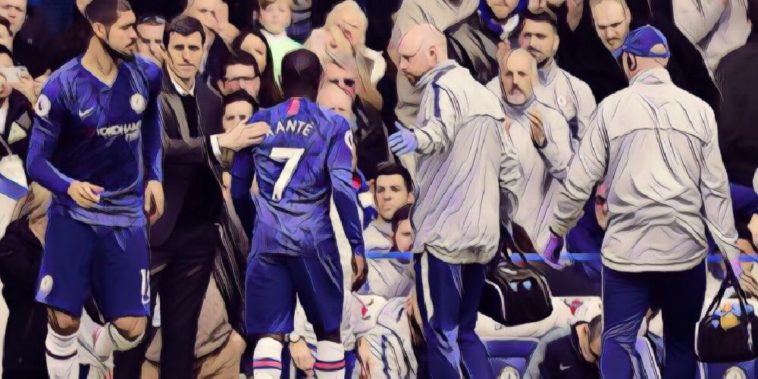 Chelsea’s Europa League hopes have suffered a fresh setback after reports say that N’Golo Kante has suffered another injury.

The dynamic midfielder picked up a hamstring injury in the 10th minute of Chelsea‘s penultimate Premier League game of the season, the 3-0 win over Watford.

The injury kept him out of the Europa League semi-final second leg against Eintracht Frankfurt as well as the 0-0 draw with Leicester on the final day of the season, but was expected to recover in time to face Arsenal in Wednesday’s final in Azerbaijan.

He returned to training with the Blues last week, with Maurizio Sarri saying he was ‘optimistic’ that the Frenchman would fit enough to play over in Baku.

However, according to The Guardian, the 28-year-old has suffered a fresh injury set-back having twisted his knee over the weekend, with the report saying that the Frenchman was in ‘clear discomfort’ and was due to be assessed by the clubs medical staff on Saturday afternoon.

The report adds initial assessments were ‘far from promising’ and that Kante is now ‘expected to miss out’ of this weeks final, joining Antonio Rudiger, Callum Hudson-Odoi and Ruben Loftus-Cheek in the treatment room, with the trio all having suffered long-term injuries in the latter weeks of the Premier League campaign.

Kante’s injury means that Maurizio Sarri is likely to be forced to start Wednesday’s final with a midfield trio of Jorginho, Mateo Kovacic and Ross Barkley.

Can you name the 30 biggest transfers in football history? Try our latest quiz!