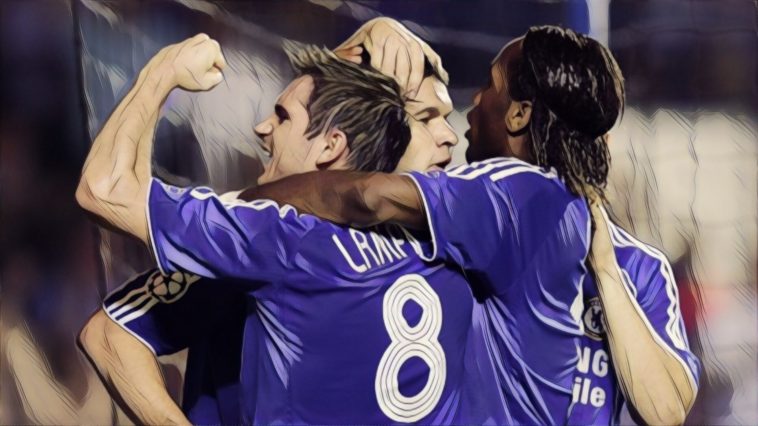 Champions League regulars since the turn of the millennium, Chelsea have continually mixed with Europe’s elite since Roman Abramovich’s billionaire takeover at Stamford Bridge back in 2003.

After reaching the latter stages on several occasions, the club would make history by becoming the first London side to be crowned champions of Europe by beating Bayern Munich in the 2012 final.

The club have an illustrious modern history in European football’s most prestigious tournament, and we’ve decided to take a look back at their greatest goalscorers from Champions League campaigns gone by.

The Spanish forward will undoubtedly be remembered as an expensive flop for his time in South West London, having failed to discover his best form following his British-record £50m move from Liverpool in 2011.

Torres world score just 45 goals during his three-and-a-half year spell at Stamford Bridge, though would often save his best displays for Europe and played a key role in both their 2012 Champions League triumph and Europa League success the following year.

Torres would score 10 Champions League goals during his time at Chelsea, and it was the forward’s late counter-attacking goal in Barcelona which sealed their passage to the 2012 final, sparking this ever so strange reaction from Gary Neville:

Five of the best players to play for Liverpool and Chelsea

The Champions League was often a cruel tournament for John Terry.

The former Chelsea captain may have drawn sniggers following his full-kit antics during the club’s 2012 celebrations, though the long-serving defender was as influential as anyone during the club’s best European campaigns despite missing their greatest moment through suspension.

Missing the club’s final success followed on from Terry fluffing his lines at the opportunity to win the tournament four years earlier, infamously slipping during the club’s penalty shoot-out defeat to Manchester United.

However, Terry’s remarkable consistency saw him join an exclusive list of players to feature 100 times in the tournament, the defender leaving the Blues with a club-record 109 Champions League appearances, scoring 10 goals.

The French forward scored 12 Champions League goals for the club, his finest European campaign coming in 2010/11, where he found the net seven times in just nine appearances as Chelsea excited the competition at the quarter-finals.

However, Anelka is another Chelsea player whose most memorable Champions League contribution was for the wrong reasons, as it was the Frenchman’s spot-kick miss which handed Manchester United the trophy in the 2008 final.

Chelsea’s all-time record goalscorer with 211 goals, the former England midfielder would score 23 times for the club on Europe’s biggest stage, including in the 2008 final loss to Manchester United.

The Blues’ favourite would deliver on several huge occasions in Europe for the club, including converting an emotional and crucial penalty in a pulsating quarter-final tie with Liverpool just days after his mother’s death on route to that 2008 final.

He would play a crucial role in the club’s triumphant campaign, scoring in knockout stage wins over Napoli and Benfica, before captaining the side in the final in the absence of the suspended Terry.

Regarded by many as Chelsea’s greatest ever player, he is their second highest scoring player in Champions League history.

Rarely has a man delivered on the biggest stage more regularly than the Ivorian icon. The Chelsea forward is synonymous with the greatest triumphs in the club’s modern history, having found the net 10 times in 10 finals throughout his career.

Drogue would score 36 Champions goals over two spells at Stamford Bridge, an all-time record for the club, with the 2012 final being undoubtedly his greatest moment in a Chelsea shirt.

Having been sent off in the final defeat to Manchester United four years earlier, Drogba’s dramatic late equaliser forced extra-time against Bayern Munich in their own Allianz Arena in the 2012 showpiece.

The tie would head to extra-time and penalties, and following several saves from Petr Cech, Drogba had the chance to make history. He duly obliged, crowning Chelsea champions of Europe for the first time.

📅 #OnThisDay in 2004, Didier Drogba signed for Chelsea. He became a club legend. 🔵