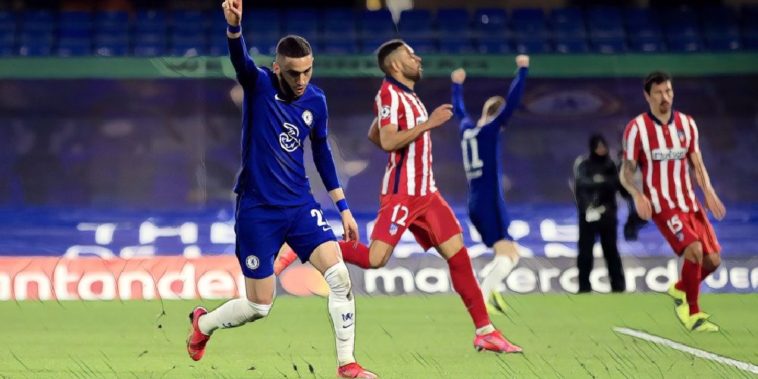 Chelsea became the third English side to progress into the Champions League quarter-finals as they cruised to a 3-0 aggregate win over Atletico Madrid.

The Spanish side were pretty poor in their ‘home’ game which was played over in Bucharest, with Olivier Giroud’s bicycle kick giving Chelsea a lead to defend coming into the second-leg at Stamford Bridge.

The opening moments of this match looked as though Atletico would press Chelsea much higher as they went in search of the goals they needed, though they quickly dropped back following the Blues’ crisp passing and confidence in possession.

Atleti would see a decent shout for a first-half penalty turned down as Cesar Azpilicueta appeared to pull Yannick Carrasco back inside the area, the Belgian going down a little theatrically, with neither the referee nor VAR feeling it was worthy of a spot-kick.

Chelsea would double their aggregate advantage in the 34th minute, Kai Havertz releasing Timo Werner down the left who used his electric pace to drive into the box before squaring it to Hakim Ziyech who finished first-time with his unfavoured right foot.

Despite needing two goals, the Spanish side offered very little throughout the contest, and any lingering hopes of a late comeback were truly extinguished with nine minutes to play when former Man City defender Stefan Savic was shown a straight red card for an elbow into the chest of Antonio Rudiger at an Atletico corner kick.

Following the red card, Callum Hudson-Odoi had a couple of opportunities to extend his side’s advantage, the first one being saved by Oblak while the second was blocked by an Atleti defender.

The west London side would eventually score a second on the night, Christian Pulisic leading a rapid breakaway before slipping the ball into the path of left wing-back Emerson, who fired low past Oblak with his very first touch of the ball having only just been introduced as a stoppage-time substitute.

13 – @ChelseaFC are unbeaten in their 13 games under Thomas Tuchel in all competitions, the longest ever unbeaten start by a manager for the Blues in the club's history. Methods. #CHEATM pic.twitter.com/uq5EO4GAdB

The win made it 13 matches unbeaten following Thomas Tuchel’s appointment in January, the club progressing to the last eight for the first time in seven years, and speaking afterwards the German praised his side’s ‘teamwork, courage and reliability’.

“Very good performance, unbelievable effort, even from the guys in the stands… could feel we totally wanted it,” he told BT Sport.

“They tried to pressure us high in the first half but opened up some spaces in the back of the midfield and we could exploit it. Second half there were minutes where we suffered but we were ready to do what was necessary to win.

“We missed Andreas Christensen today, Thiago [Silva] for many weeks – big personalities. I tell Kurt Zouma this morning he plays and he steps up. It’s about teamwork, courage and reliability of feeling safe around each other.”

The Premier League side looked totally in control for large swathes of the game, and Tuchel praised his side’s willingness to match Atletico’s physicality.

N’Golo Kanté made more ball recoveries than any other player against Atletico (13).

He also made the joint most interceptions for Chelsea (2). #UCL pic.twitter.com/QgtOQtic4Q

“We know if we cannot find solutions with offensive play, we can rely on our physical game,” he said. “We were absolutely not afraid to put it on a physical level if we don’t get offensive solutions. We enjoyed the battle. The guys were totally on and sharp, we were super hungry to go through.

Next up for Chelsea is their FA Cup quarter final fixture against Sheffield United on Sunday.