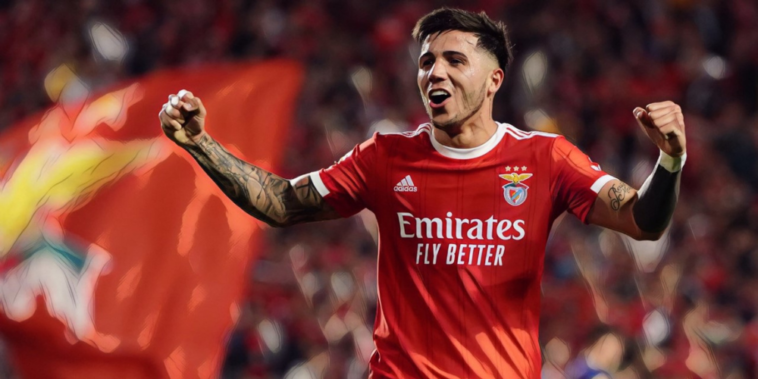 Chelsea are in ‘advanced’ talks with Benfica over a club-record deal for Enzo Fernandez.

The west Londoners are chasing a deal for the midfielder and are now in direct contact with Benfica over a final fee after reaching an agreement on personal terms with Fernandez.

Fernandez starred as Argentina were crowned world champions last month and was named as the Best Young Player at the World Cup, with Chelsea moving quickly to secure a deal for the 21-year-old.

Benfica have insisted that Fernandez will not be allowed to leave for less than his €120m (£106m) release clause, with multiple reports having suggested that Chelsea will pay a small premium on top of that fee to ensure the deal can be done over instalments.

The fee is set to reach around £112m and would eclipse the £100m British transfer record figure that took Jack Grealish from Aston Villa to Manchester City in 2021.

Chelsea and Benfica will hold new direct talks today for Enzo Fernandez. The deal is advanced as reported last week, but Rui Costa's final approval is still pending – as key step to get it done. 🚨🔵 #CFC

Enzo has agreed terms with Chelsea last Wednesday. He wants the move. pic.twitter.com/zIXn5NQgmM

According to Fabrizio Romano, Chelsea are awaiting the final approval from Benfica with the player keen on the move to Stamford Bridge.

Fernandez only signed for Benfica from River Plate last summer, in a deal worth around €18m (£15m). His reputation has enhanced during an impressive first season in Portugal, before his breakthrough with the national side this winter.

Fernandez made his senior debut for Argentina in September and began the World Cup on the bench. He scored a crucial goal in the group stage win over Mexico and maintained his place for the remainder of the tournament as La Albiceleste were crowned world champions for a third time in Qatar.