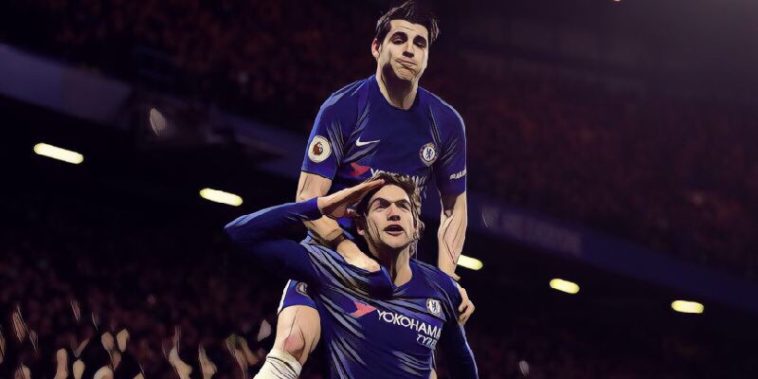 Goals from Álvaro Morata and Marcos Alonso in the second half secure the 2-0 win as Chelsea topple Brighton at Stamford Bridge on Boxing Day.

It was their first matchup since March of 1989 when Chelsea walked away as 1-0 winners in a League Division Two matchup.

César Azpilicueta and Cesc Fàbregas each contributed assists to the goals to help Chelsea climb closer to Manchester United at second place. Only one point separates the two clubs since United drew 2-2 with Burnley. Meanwhile, Brighton and Hove Albion hold their midtable spot at 12th place for now.

Here are five things we leaned from Chelsea’s win over Brighton.

Chelsea sleepwalk in first, but wide awake for second

The home team controlled possession in the first half, but found it hard to break through the Brighton defence.

With goalkeeper Mathew Ryan guarded by banks of four and five, Chelsea’s chances seemed slim as they were limited to low-quality chances. Five out of the 11 shots were outside of the box, but Chelsea do not have great shooters from distance. Antonio Conte surely couldn’t have been content with his side going into halftime.

The manager’s talk in the dressing room must’ve lit a fire under the Blues as they woke up from their slumber. Morata scored within the first minute, and Chelsea did not let their foot off the gas pedal until the final whistle. Their second half was the sort of side that was missing throughout the draw to Everton and loss to West Ham. It would ease the minds of Chelsea fans if the side could start like this from the first minute until the 90th.

6 – Cesar Azpilicueta has assisted Alvaro Morata for six Premier League goals this season – the joint-most for one @ChelseaFC player to another in a single season (Fabregas-Costa 14-15 and Lampard-Drogba 09-10). Amigos.

The Spanish combination of Azpilicueta and Morata have been deadly for the first half of the season, creating goal after goal. You can almost expect a goal once the defender crosses the ball and you see the forward on the end of it.

Then, the second goal of the game happened, and it was another pair of Spaniards linking up for the dagger. Fàbregas’ corner found the head of Alonso who finally scored after Ryan saved two of his chances with acrobatic saves a few minutes before.

The Spaniards were the key to Chelsea’s win today, combining for 12 key passes and nine shots, with six of them on target. After a first half that lacked urgency from the Blues, the four of them helped turn another inevitable draw to a comfortable victory.

Brighton defend in numbers, but that’s it

The Seagulls must’ve known they were in for a barrage of attacks when they walked into Stamford Bridge, and Chris Hughton prepared his side accordingly. Setting up in a 4-5-1 formation, they limited the space between the lines for Chelsea’s creative playmakers to get through.

31 clearances were made by Brighton, with the biggest one coming from Lewis Dunk off the line to stop an Eden Hazard shot. It seemed like all their energy was spent on defending, and they couldn’t muster an attack. Brighton finished the game with eight shots, and only one was on target.

Andreas Christensen missed today’s game due to illness, but he didn’t really miss a game where he was needed in the backline. Because Brighton focused so much on stopping Chelsea’s attack, the Seagulls couldn’t focus on their own chances.

The midfielder gave more fuel to his many critics with his missed chances throughout the match.

The first chance came in the 19th minute when Fàbregas’ cross was headed by Antonio Rüdiger to Tiémoué Bakayoko’s feet for a tap in the six-yard box. What looked to be easy to others was not for the Frenchman as he looked in horror as he stabbed the ball wide and out of play.

He missed a couple of more chances during the rest of the match, but played generally well along with the rest of his teammates.

Even with the mistakes he made, there is no one in the current Chelsea roster that I would find as a suitable replacement. Chelsea are missing the goal threat outside of the box, and I hope Bakayoko can add that to his set of skills. The club has no midfielder that can shoot from distance, unless you count a David Luiz knuckler that goes in from time to time. Without that threat, teams will place more emphasis in stopping Hazard with a fury of kicks to his ankles.

Chelsea will have a lot of work to do in the January transfer window to hopefully find the player they desperately need.

December is almost over!

With one more match against Stoke City on Saturday, Chelsea’s fixture-packed December is almost coming to a close.

Granted, Chelsea don’t get their first week-long break until the middle of January, and they have to face Arsenal twice (once in the Carabao Cup semifinals) before they can rest.

The Blues have earned 13 points out of a possible 18 for December in the Premier League, and they advanced in the Champions League and Carabao Cup. A loss to West Ham and draw to Everton hurts, but Chelsea have come out of December relatively unscathed, especially since Manchester City continue to look to run away with the Premier League title this season.

Chelsea have to get through five more matches until they have a week off before they face Brighton once again, this time at Falmer Stadium. Hopefully, the Blues can continue their run of relatively good form.