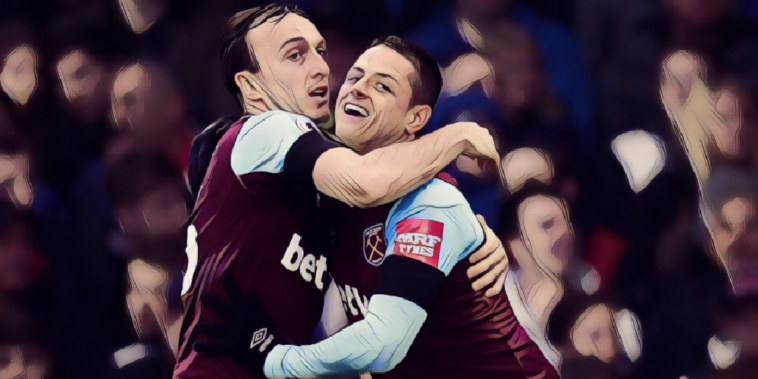 Chicharito’s strike in the 73rd minute levelled the game for West Ham who held on to a 1-1 draw against Chelsea at Stamford Bridge on Sunday.

Marko Arnautovic chased the ball deep into the Chelsea box who found Chicharito in open space for the blast past Thibaut Courtois. The Mexican striker was only introduced into the game three minutes before his goal, replacing Edimilson Fernandes.

Cesar Azpilicueta scored Chelsea’s goal in the 36th minute after flicking the ball over his head and tapping it in before Joe Hart could react.

The derby draw puts West Ham six points above the relegation zone with only six games remaining, while the defending champions Chelsea drop farther away from the top four.

A tribute to the late Ray Wilkins was held before the match. The former Chelsea and England captain passed away from a heart attack on Wednesday. Fans of both clubs also stood up to applause in the eighth minute while singing, “There’s only one Ray Wilkins.”

Here are five things we learned from the draw between Chelsea and West Ham.

Chicharito has now scored nine goals against Chelsea in 14 matches. He’s scored in all four substitute appearances at Stamford Bridge.

4 – Chicharito has appeared four times as a substitute at Stamford Bridge in the Premier League, and scored a goal in all four of those matches. Impact. pic.twitter.com/sK9NnOPGoQ

His introduction to the game was certainly key for West Ham to get their goal, with Arnautovic struggling as a lone striker. David Moyes made a correct call in switching to two forwards up front with Joao Mario supporting them from behind.

Chicharito held up at the top of the box while the Chelsea defence chased Arnautovic who went to retrieve the ball from deep. After one decisive pass, the substitute found himself in acres of space to shoot.

While this goal won’t be as memorable as the one he scored with his face, he will always be remembered as a Chelsea killer.

All possible London derbies have finished for Chelsea’s season, and the record hasn’t looked great.

Had Chelsea won these three matches, they would be two points behind Tottenham and Liverpool for a top four position in the table. Instead, they sit closer to Burnley in seventh rather than Spurs in fourth.

Derby days are understandably somewhat unpredictable, but these are matches that Chelsea can’t afford to lose. Chelsea and West Ham are on opposite sides of the capital and the Premier League table, but they were even on Sunday.

Tough road ahead in East London

The point earned against Chelsea put West Ham in a better position to avoid relegation, but the last six games of the season will be difficult to overcome.

West Ham are scheduled to face off against Stoke, Arsenal, Manchester City, Leicester, Manchester United, and Everton. None of these will be easy games for the Hammers.

Fortunately for the East London side, the bottom three teams are in bad form with fewer games to play. If West Ham can win one or two of those matches, they could be blowing bubbles in the Premier League for another season.

Two goals were disallowed because of very close offside calls. Morata was on the end of both of them. If they were counted, Chelsea could have been running away with the win.

While he didn’t end up scoring in the game, he was a physical presence winning aerial duels against the West Ham defence. Jumping over both Angelo Ogbonna and Pablo Zabaleta earned him an assist as the ball fell to goalscorer Azpilicueta.

Morata was heavily involved in the attack with Eden Hazard and Willian, and Chelsea combined for a total of 23 shots. The Spaniard’s performance forced West Ham to defend for most of the game. It’s unfortunate that he wasn’t able to get a winning goal at any point.

Chelsea weren’t able to capitalise on a Liverpool draw in the Merseyside derby. The Blues now need to make up a deficit of 10 points with only six games remaining.

They need to hope for either Tottenham or Liverpool to make a few mistakes along the way, but I would be more worried about Chelsea’s performance. Draws against teams at the bottom of the table won’t help in qualifying for the Champions League.

I would have probably commented earlier in the season that Chelsea’s last few games look like a cakewalk for the most part, but Chelsea haven’t been winning the easy games. The club should be more worried of dropping farther than fifth. Arsenal are only three points behind in sixth, and things could get a lot worse for the West London club.