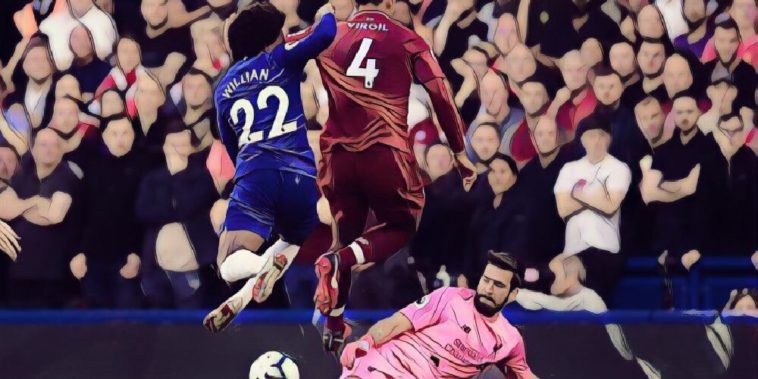 A game of brilliant quality ended all square as Liverpool scored late to earn a point. As the season progresses this could be one of great importance for both teams.

Despite each team only scoring a goal apiece, there could have been so many more. It became a game of missed chances combined with excellent defending.

It was Liverpool who had the most chances in the game which they struggled to put away. However, Chelsea had better quality chances which they should have done better with.

In the end, the number of chances Liverpool created cancelled out Chelsea’s better chances. The result was a fair one although Chelsea will be bitterly disappointed not to hold on to their lead. Despite both teams probably believing they have greater quality than the opposition the game will actually have shown each team just how good the other is.

The Battle of Midfield

Possession was split evenly between the two sides but it was Chelsea who controlled the midfield areas for the vast majority of the game. Liverpool tried to shake things up by replacing Henderson with Keïta but it only improved things slightly.

Chelsea have been topping the table for passing, not just in England but across the top leagues in Europe and it was evident why in this game. Maurizio Sarri has implemented a fantastic passing game into Chelsea’s football in just a short space of time. Quality this high is capable of challenging for the league.

Guardiola’s Man City will give this midfield a run for its money though.

It’s become something of a cliché that strong defences win titles but that definitely looked the case in this match and last season. The reigning champions, Manchester City, had by far the lowest expected goals against them (xGA) last season and Liverpool & Chelsea show similarities to that.

Each pair of centre-backs had outstanding games. On one hand, David Luiz and Rudiger intercepted brilliantly, were involved heavily in the build-up play and even had a goal-line clearance each. Meanwhile, Virgil van Dijk was excellent at getting the ball clear and intercepting through balls while Joe Gomez did well to prevent the excellent Hazard from getting in behind too often.

These two teams have been the best in the league alongside Manchester City this season. However, the quality of the opposition never fazed the defenders which will give each team great optimism because they won’t have much tougher games than this.

A Game of Fine Margins

There were countless moments throughout the game that could have completely changed the outcome.

Eden Hazard gave Liverpool’s right-hand side an incredibly difficult task which Alexander-Arnold struggled to cope with. Gomez was unable to cover the full back’s mistakes every time which led to Alisson having to make some brilliant saves.

Without the brilliant saves of Alisson and the quick reactions of van Dijk and Gomez, Chelsea could have been 3-0 up at half-time.

However, Liverpool had many opportunities to change the course of the game as well. The goal-line clearances and Shaqiri’s glaring miss are obvious ones. Again, it was the quality of the centre-backs along with an impressive midfield that helped prevent Liverpool from making much of them. Shaqiri’s miss will be of great relief to Chelsea though.

On another night this could have been a completely different game. Consequently, it could have made a big impact come the end of the season if there are just a few points separating these teams.

Eden Hazard had an absolutely outstanding game and is arguably the best player in the Premier League at the moment. He caused so many problems for one half of Liverpool’s defence but it is the other half that teaches us more in this game.

Giroud and Willian (later Morata and Moses) had very little impact on the game. Nearly all of Chelsea’s best attacks came through Hazard which raises the question of how much better Chelsea could be.

It’s easy to say that another player of Hazard’s ability would make them better and that’s obviously true. However, Chelsea could ideally do with a player that can also cause problems even if they don’t have the same technical ability as Hazard.

The Liverpool defence had no trouble dealing with Chelsea’s other attackers even though they do possess great quality. With the way that Chelsea are now playing, their pace will cause a lot of teams plenty of problems. The only times Liverpool were threatened came when Hazard had the pace to get in behind and Chelsea would be a frighteningly good team if they had a bit more of that.