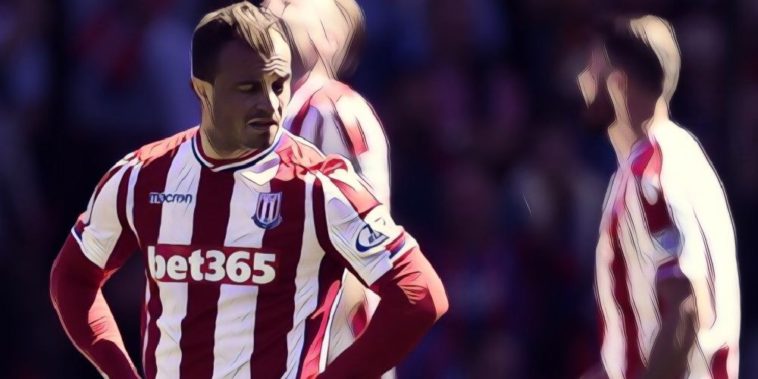 Stoke Midfielder Charlie Adam has spoke out following the clubs relegation from the Premier League on Saturday.

The Potter’s 10 year stay in England’s top flight came to a bitter end following a 2-1 home defeat at the hands of Crystal Palace on Saturday last.

Speaking on BBC Radio 5 live on Monday, the former Liverpool and Blackpool midfielder aired his disgust at the club being relegated saying some of his team-mates’ attitudes have been ’embarrassing’ during the season.

“It’s embarrassing because we should never have been in that situation. As a group you have your seven or eight who try their hardest to make it work and we failed. A lack of discipline from certain players has been embarrassing.”

“I’ll be honest for the supporters, I think some players have been getting away with murder for a long time and it’s difficult for supporters. It’s not just one or two, I think there are four or five that could be counted.”

“The biggest thing for us is we never replaced Marko,” he said.

“You can lose players, but when you lose players who can win you a game you are going to struggle. As a group of players we should hang our heads in shame because that club should never be relegated.”

The sale of experienced heads such as Glenn Whelan, Shay Given, Phil Bardsley and Jonathan Walters were a clear loss to what was an unhappy dressing room throughout the season.

“We know what’s going to happen. People will lose their jobs and we’re the ones to blame for that.” Adam concluded.