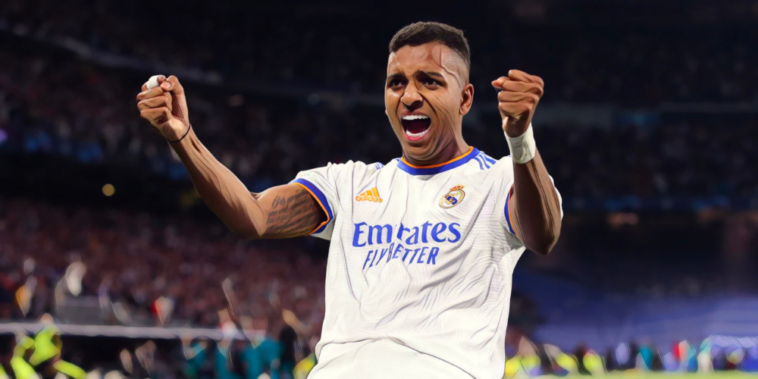 Our weekly Champions League awards honour the best – and worst – of the football action from the semi-final second legs.

Could it really be anything else?

Real Madrid produced another captivating comeback to stun Manchester City and reach the final, leaving it late to score twice and force their semi-final into extra time.

City looked to be heading towards a second successive final after Riyad Mahrez’s goal gave the Premier League side a 5-3 lead on aggregate, only for Rodrygo to come off the bench and make history at the Bernabeu.

The 21-year-old became the first player to score two goals in the 90th minute of a Champions League knockout game, saving the semi-final for the Spaniards in stunning style.

Rodrygo bags his second goal in a matter of minutes!

How has this happened!? 😱#UCL pic.twitter.com/WuimFkZdvI

Luis Diaz deserves an honourable mention for his impact off the bench in Liverpool’s 3-2 win at Villarreal, but it’s impossible to look past Rodrygo for his match-winning contribution.

The Brazilian scored a crucial goal off the bench in the quarter-final win over Chelsea and repeated the trick against Manchester City, his double to down the Premier League champions one of the most memorable Champions League comebacks of all time.

Rodrygo's goals in the 90th and 91st minutes were Real Madrid's first shots on target of the game 🤯 pic.twitter.com/zjguoyjiTX

Real Madrid had looked dead and buried in the final stages with City the more likely scorers of a second goal, but the game turned as Rodrygo’s quick-fire brace ended the visitor’s hopes of a maiden European crown.

It’s six goals in his last six games for the 21-year-old who will hope he has done enough to earn a place in the club’s final XI.

The hero of last season’s semi-final win over Paris Saint-Germain, Riyad Mahrez looked to have booked City another place in the final after an emphatic finish put the Premier League side in control at the Bernabeu.

Bernardo Silva’s driving run attracted white shirts around the ball, before threading a pass into the Algerian who lashed home inside Thibaut Courtois’ near post.

It’s not often our Save of the Week award goes to an outfield player, but Ferland Mendy’s brilliant block deserves its recognition.

Thibaut Courtois made eight saves to earn the man of the match accolade at the Bernabeu, including superb stops from Phil Foden and Jack Grealish, though the Belgian had his full-back to thank for this miraculous goal-line clearance.

Man City were THIS CLOSE to going through 🤏#UCL pic.twitter.com/7zWYU8pAyP

Liverpool will now compete in every possible game this season after reaching the Champions League final, as the Reds chase unprecedented history and a potential quadruple of major trophies.

Having won the Carabao Cup earlier this season and with an FA Cup final against Chelsea to come, Jurgen Klopp’s team are the first English club in history to reach all three showpieces in the same campaign.

1 – @LFC have become the first ever English club to reach the final of the European Cup/Champions League, FA Cup and League Cup in the same season. Dominance. #VILLIV pic.twitter.com/3EDpSScYbO

Mohamed Salah was candid in his desire to face Real Madrid in the Champions League final, telling BT Sport of his preference to face the Spaniards in the aftermath of Liverpool’s progress to the final.

Real Madrid’s win over Manchester City has set up a rematch of the 2018 final in Kyiv, one which saw Salah substituted in the first-half after a controversial challenge from Sergio Ramos.

The Egyptian has since wasted little time in taking to social media, admitting there is ‘a score to settle’ when the two teams collide in Paris later this month.

Villarreal had threatened a major surprise after levelling their tie with Liverpool, cancelling out the Reds’ two-goal advantage across the opening 45 minutes of the return in Spain.

Jurgen Klopp’s team came out after the break a different team, but were given a huge helping hand after a calamitous goalkeeping performance from Geronimo Rulli.

The Argentina international allowed Fabinho’s low shot to squirm through his legs for Liverpool’s first, before another moment of unconvincing goalkeeping allowed Luis Diaz to head home a second moments later.

3 – Gerónimo Rulli 🇦🇷 has made the most errors leading to goals of any player in the Champions League 2021/22 (3), and he is the first goalkeeper to make two in the same knockout Champions League game since Loris Karius 🇩🇪 in the 2018 final. Unfortunate. pic.twitter.com/ZSPL3q60DM

The worst, however, was saved for last as 29-year-old raced out of his goal into no man’s land, allowing Sadio Mane to beat him to the ball and turn into an open net.

One to forget for Rulli, who has made more errors leading to goals than any other player in the 2021/22 Champions League season.