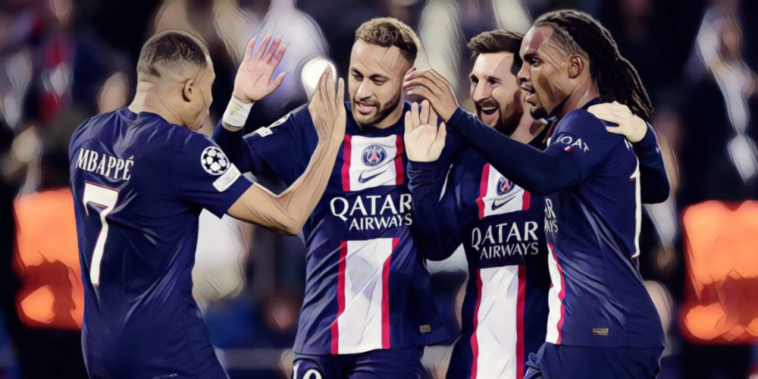 The Spaniards crashed out of the competition in dramatic fashion this week, as late drama condemned Diego Simeone’s side to an early elimination. Atletico needed to win to keep their hopes alive and their clash with Bayer Leverkusen proved a thrilling affair, as the two teams shared four goals inside the opening 50 minutes at the Wanda Metropolitano.

Atletico were handed a late, late lifeline with a stoppage-time penalty, but chaos ensued as Yannick Carrasco’s 98th-minute spot-kick was saved. Saul Niguez’s follow-up then hit the crossbar, before a third rebound from Reinaldo struck the heels of the stunned Carrasco and went over the bar.

Given the unearthly standards the seven-time Ballon d’Or winner has set, Messi endured a modest first season at PSG last term. After taking a season to settle, we are beginning to see the old magic on a more routine basis.

Messi might not be comparable to his spellbinding peak a decade ago, but the current version can still claim to be arguably the world’s finest footballer – regardless of his Ballon d’Or snub.

Messi is the first footballer in Europe’s top five leagues to reach 10+ goals and 10+ assists in all competitions this season, following an unplayable performance as PSG’s superstar trio purred in a 7-2 thrashing of Maccabi Haifa.

Admittedly the opposition were overwhelmed, but the calibre of PSG’s forward threat was on show, with Messi orchestrating a huge win at the Parc des Princes.

Lionel Messi has 23 goal contributions in 16 matches for PSG this season 🤯 pic.twitter.com/0SgNiPjEaq

He scored twice – including a nonchalant outside-of-the-boot finish to open the scoring – and created two more, as he moved to 23 goal involvements in just 16 appearances in 2022/23.

With PSG’s passage to the knockout rounds assured, the true test of this team will come in the New Year. If Messi can maintain his current levels, however, the Parisians carry a chance.

Chelsea are through as group winners after a 2-1 win at Red Bull Salzburg, with the decisive goal coming in spectacular fashion from the left boot of Kai Havertz.

Havertz has flattered to deceive on occasion since signing for Chelsea, with the west Londoners unable to coax his best on a consistent basis. The German has a happy habit of delivering when it matters however, and scored this brilliant effort in Salzburg this week.

"Now that is just brilliant!"

Kai Havertz casually yet spectacularly whips the ball into the top corner to put Chelsea 2-1 up… 🙌#UCL pic.twitter.com/QlTsP1HhH8

Bonus points for the added aesthetic of bouncing in off the crossbar.

“Is this the worst miss you’ve ever seen?”

Usually, when videos are captioned with such statements, there’s an element of exaggeration in a social media world where click-bait can be king.

It’s difficult to disagree with BT Sport on this one, however, as Shakhtar Donetsk’s Danylo Sikan etched his name into Champions League infamy with arguably the competition’s worst miss in modern memory.

Sikan’s shocker saw Shakhtar draw with Celtic, leaving the Ukrainians in need of a win against RB Leipzig in their final fixture to progress.

The forward will have sleepless nights should Shakhtar bow out, with open goals rarely presented easier than this.

The Porto goalkeeper made Champions League history this week after becoming the first shot-stopper to save three penalties in a single campaign.

Costa kept out penalties as Porto won home and away against Bayer Leverkusen earlier in the group, before completing a remarkable hat-trick against Club Brugge this week.

Diogo Costa is the first goalkeeper on record to save three penalties in a single Champions League campaign. 🧱#UCL pic.twitter.com/rk1trQDHgD

His heroics against the Belgians were even more remarkable as he twice saved a re-taken penalty, first from Hans Vanaken’s effort before keeping out Noa Lang after a second take was ordered.

Marcus Edwards came back to haunt former side Spurs this week, with the winger on the scoresheet as Sporting Lisbon held the north Londoners to a 1-1 draw.

Edwards was impressive in both meetings with Spurs and became just the fourth Englishman to score a Champions League goal against an English team while representing a foreign side.

4 – Marcus Edwards is the fourth Englishman to score against an English club in the UEFA Champions League while playing for a foreign team, after Patrick Roberts vs Manchester City, Fikayo Tomori vs Liverpool, and Jude Bellingham vs Manchester City (twice). Enfield. pic.twitter.com/iQXnAD6qVq

It’s been a miserable Champions League campaign for Juventus, who crashed out of the competition after a 4-3 defeat at Benfica.

Juventus have taken just three points from their five games to date and need to beat PSG in their final fixture to even be sure of a place in the Europa League.

Leonardo Bonucci endured a nightmare as the Bianconeri were cut apart at Benfica, with the Italians 4-1 down before a late fightback added some respectability to the scoreline. Bonucci struggled and appeared to be a footballer in the autumn of his career as he made a number of mistakes.

Far from a captain’s performance on a night when Juventus had no room for error. Has time finally caught up with the centre-back?