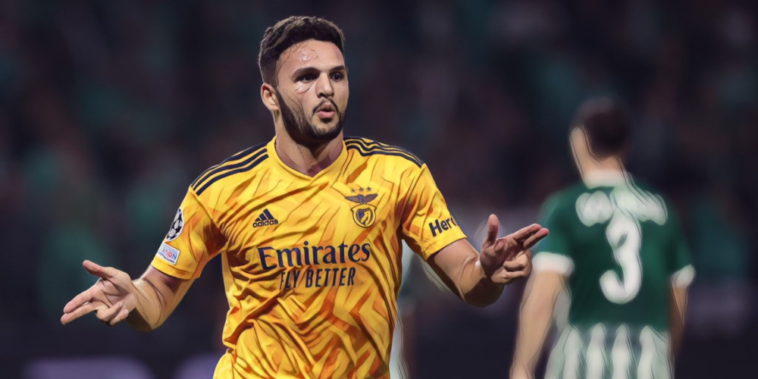 Our Champions League awards honour the best – and worst – of the European football action.

While many have marvelled at Napoli’s free-scoring side in this season’s competition, Benfica have quietly compiled a hugely impressive campaign of their own.

Quarter-finalists last season, the Portuguese side will have ambitions of gatecrashing the latter stages this time around after topping a group containing both Paris Saint-Germain and Juventus. Roger Schmidt’s side overhauled PSG at the top of the group in dramatic fashion this week, as a 6-1 win at Maccabi Haifa saw the two teams finish with identical records.

How Benfica beat PSG to the top of Group H:

Benfica progressed as group winners by virtue of scoring more goals away from home and will now be seeded for Monday’s last-16 draw as a result.

It was a brilliant performance against admittedly limited opposition, but two goals in the final four minutes saw Benfica top what had been deemed a tough group. The likes of Goncalo Ramos, Florentino Luís and António Silva have impressed for a side full of promising talent and Benfica – unbeaten in all competitions this season – will enter the knockout rounds in confident mood.

An honourable mention goes to Rico Lewis, who wrote his name in Champions League history after becoming the youngest player to score on their first start in the competition. The 17-year-old eclipsed Karim Benzema’s record as he marked his full debut for Manchester City with an equaliser against Sevilla.

Olivier Giroud continues to age like a fine wine and booked AC Milan’s place in the Champions League’s knockout rounds for the first time in nine years this week.

Giroud produced a masterful centre-forward performance as Milan beat Red Bull Salzburg 4-0, as the Rossoneri picked apart an inexperienced Salzburg side who needed to win at the San Siro to progress.

Sealed with a kiss. #UCL pic.twitter.com/pyILNFzgwr

The France international was the architect of the win as Salzburg struggled to deal with his threat, with Giroud opening the scoring after heading home Sandro Tonali’s corner. He teed up the second with an intelligent header back across goal for Rade Krunic to convert, before drilling in his second of the evening with a sweetly-struck strike.

He added another assist after releasing Junior Messias for the fourth goal, taking his total to six goal involvements in six UCL appearances this season.

It’s often said that you can’t teach an old dog new tricks, but the old ones continue to work well for the evergreen Giroud.

The forward continued his rich vein of form with another goal as Bayern Munich beat Inter Milan to progress with a perfect record of six wins from six in Group C.

Billed pre-tournament as the Group of Death, Bayern have breezed into the knockout rounds and Choupo-Moting put the seal on their 2-0 win over Inter with a rocket from the edge of the area.

What form this guy's in! 💫 pic.twitter.com/7RuCin7OBy

It’s hard to believe that this is the same player who struggled for goals during a single season at Stoke in 2017/18. The 33-year-old has eight goals in 13 appearances for Bayern this season, averaging a goal or assist every 56 minutes.

Maybe the Champions League is easier than a cold, windy night in the Potteries…

Sadio Mane channeled his inner Manuel Neuer to deflect Nicolo Barella’s thumping effort over the bar, with the official awarding only a corner kick.

This was deemed not a penalty…

Sadio Mané didn't have much time to think about it, the right decision?#UCL pic.twitter.com/afFZqX21di

Red Bull Salzburg continue to churn out promising young talent, with the latest batch impressing in the Champions League again this season despite a group stage exit.

Incredibly, the club’s oldest player for their decisive clash against AC Milan this week was Maximilian Wöber, a comparative veteran at just 24.

24 – The oldest player in Red Bull Salzburg's starting XI to face AC Milan is 24-year-old Maximilian Wöber; he is the youngest player in Champions League history to be his team's oldest starter in a match. Shoulders. pic.twitter.com/kbKYcYnkem

It’s been a miserable return to the Champions League for Rangers this season, whose first group stage appearance for more than a decade has ended with unwanted history.

No side has ever compiled a worse group stage campaign than Giovanni van Bronckhorst’s side, who suffered six straight defeats, scored just twice, and conceded a whopping 23 goals in the process.

Rangers finish the group with 0 points and a -21 goal difference, setting the record for the worst group stage in Champions League history 😳 pic.twitter.com/Yyb7hnHSLe