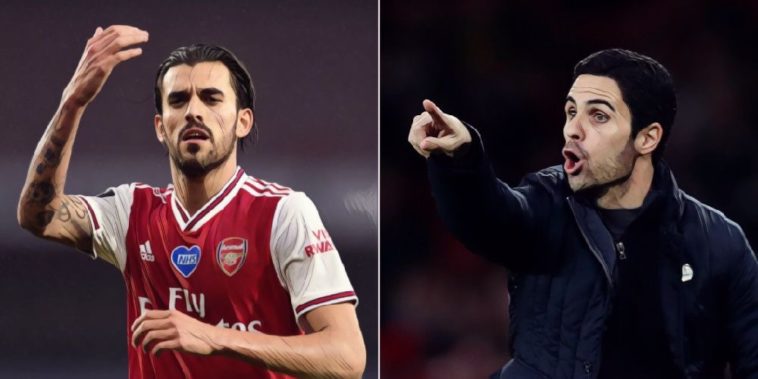 Dani Ceballos has praised the influence of Mikel Arteta at Arsenal and has discussed the possibility of returning to the club next season.

Ceballos signed for the north London side on a season-long loan deal from Real Madrid and has emerged as a key figure for the side following the Premier League‘s restart, overcoming a difficult period to thrive for Arteta’s side in recent weeks.

The Spaniard has praised the influence of his compatriot since Arteta’s arrival as head coach in December, revealing how the ‘mister’ has got the best from him in an ‘unusual’ deeper role at the heart of the side’s midfield.

“The míster is living the game constantly,” Ceballos told Sky Sports. “We know it’s a plus for us to have someone next to the pitch who can see things we can’t see at certain moments, and he can communicate with us much quicker now that there is nobody in the stadium.

“He is using me in a position which is unusual for me, as a pivot in front of the defence next to Granit (Xhaka), so I think it’s good that he is helping. Someone who is looking at the pitch from the outside can see all 22 players and give better advice about the best positions to be in.”

Ceballos also discussed the differences between Spanish football and the ‘physical’ demands of the Premier League, admitting he initially found it difficult to adapt to the pace of the game after arriving in England.

??⚽️ On our way to the finals! We have shown what we are capable of! My team is great. ????Only one more step! Let's go for all, Gunners!??@Arsenal #FACup #GreatVictory #ArsenalVsManchesterCity #Final #VamosGunners pic.twitter.com/vhQgHfUE6t

“I found it difficult to adapt to that and get used to the rhythm of the game, which was more or less what I expected because I knew the speed was going to be very high. But after my injury, I came back and reached a very good level. Since then, I think I’ve made a lot of progress physically as well as technically.”

The 23-year-old is due to return to Real Madrid at the end of the season, though his future remains unclear at present, the midfielder having failed to force his way into Zinedine Zidane’s plans at the Bernabeu since arriving from Real Betis three years ago.

Ceballos says he will talk to his parent side regarding his situation upon returning to the Spanish capital, but offered hope of a return to Arsenal by refusing to rule out a permanent return to the Emirates.

“Right now, I’m only thinking about the next games because if we win them, we have some chance of qualifying for the Europa League,” he added.

“After that, I have to be calm. I have to return to Real Madrid and they have to make a decision because I have a contract there for the next three years.

“Once I know their decision, I will sit down with my family and the people close to me and see what’s best for me next year.

“But the truth is I’m very happy at Arsenal. It’s a club in which I already have a year of experience, so it would be very easy to return. I wouldn’t have to adapt to a new league or new club with a different manager and players.

“I think it would be a good step for me. But like I said, my future depends on Real Madrid and right now I don’t know their decision.”

Arsenal will have a huge say in this season’s relegation scrap, facing Aston Villa on Tuesday evening before finishing their league campaign with a game against fellow strugglers Watford at the weekend.