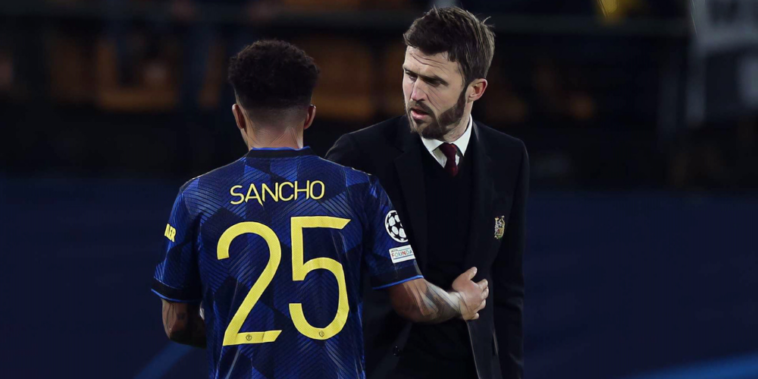 Michael Carrick has backed Jadon Sancho to have a ‘massive future’ at Manchester United, after the winger opened his goalscoring account for the club in midweek.

Sancho has endured a tough start to his career with the Red Devils since signing from Borussia Dortmund during the summer, failing to score or provide an assist in his opening 14 appearances.

The 21-year-old produced an encouraging performance during the 2-0 midweek win at Villarreal, scoring his side’s second as Manchester United secured their progression to the Champions League’s last 16 as Group winners.

Speaking ahead of this weekend’s trip to Chelsea, Carrick praised the potential of the England international and believes Sancho has a ‘massive future’ ahead of him after breaking his goal-drought for the club.

“He is a terrific player Jadon. He’s never happier than when the ball’s at his feet. He’s trying to create things, going at defenders, trying to score goals. That’s when he’s at his happiest, I’ve seen that in games and in training.

“The other side is his attitude, work rate. He put in an overall performance. He has got a massive future ahead of him.”

“Creation in any team is important and that is why we brought him to the club.

“There is so much more to come from him.”

Carrick discussed Sancho’s somewhat slow adaptation following his eagerly-anticipated move from Dortmund, insisting it can take time for young players to adjust to a new league and new club.

“Sometimes it takes time to adapt,” said the caretaker boss. “He is a younger player at a big club, new league, it is not easy to hit the ground running.

“We were well aware of that, we believe in him. He’s got a great chance, not surprised but what he did other night.”

Carrick also discussed Donny van de Beek, who was handed a rare start during the win at Villarreal. The Netherlands international struggled for opportunities under Ole Gunnar Solskjaer, but Carrick believes the midfielder’s flexibility will make him a valuable asset moving forward.

“Donny’s one of those players who’s so flexible and can play different positions, he did the same at Ajax and for Holland. Variety can be a real strength.

“We’ve got ideas for where we think Donny is most suited but being so flexible is a real strength and a credit to what he can be for the team.”