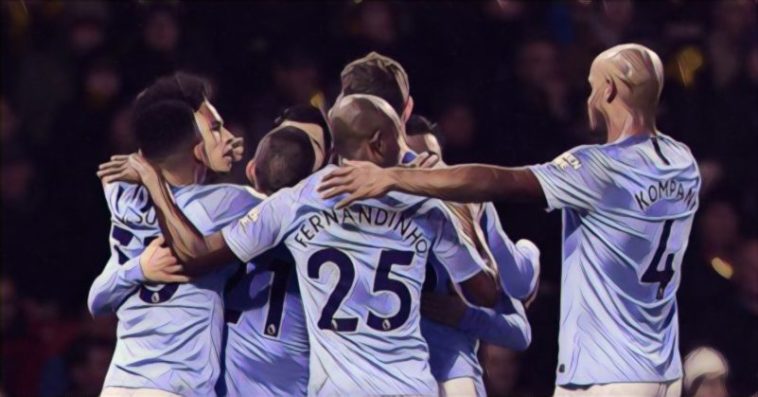 The Carabao Cup is already in the bag, and their place in the FA Cup final has already been booked, while they sit just two points behind Liverpool in the Premier League title race and have a game in hand.

Over the course of the season, Jurgen Klopp’s side have had to come from behind on a number of occasions, while also relying on a number of dramatic late winners, including their wins over Everton and Spurs at Anfield.

Man City, on the other hand, have had a relatively stress free season, with Guardiola’s men often flying out of the blocks and comfortably collecting their latest win. However, they slipped to a 1-0 defeat in the first leg of their Champions League quarter-final against Spurs on Tuesday night, and former Liverpool centre-back Carragher said that the Citizens are yet to truly have their mental strength tested.

“For all Manchester City’s brilliance this season, there has been something missing from their quadruple bid. Drama,” Carragher wrote in his column for The Telegraph.

“Victories have been too easy until now. There has been an absence of spectacular moments, tense climaxes and memorable contributions we reflect upon as defining a season. Where have they been for City? Where will they come from in the coming weeks?

“The penalty shoot-out win over Chelsea in the Carabao Cup stands apart. That aside, where would a scriptwriter find material when documenting the story of the campaign? It might be too much to expect anything to rival Sergio Aguero’s title-winning goal in 2012, but for Pep Guardiola to achieve all ambitions there will have to be at least one game, one major incident or one period in a match in which City show they are not only technically and tactically the best, but also mentally and physically.

“They have not needed to yet. That is not a criticism, just a reflection of their superiority in the majority of fixtures. Winning while in a comfort zone is a sign of class. The problem is that calmness cannot last when pursuing four trophies. That is when you have to overcome pain to win. Now the challenge is getting tougher in Europe, and with more demanding Premier League fixtures, and City have not had enough recent practice dealing with discomfort.”

If City were to win all four trophies this season, they would eclipse the achievements of the great treble-winning Manchester United side of 1999, but Carragher pointed out that the Red Devils consistently displayed their mental toughness throughout that incredible season.

“You could divide United’s route to victory in three competitions into numerous chapters. So many momentum-shifting late goals spring to mind, periods when it looked like it was all over for Sir Alex Ferguson’s side only for them to find the energy, courage and skill to turn it around.

“In the FA Cup there were two late goals against Middlesbrough in the third round, and another two against Liverpool in the fourth. There was the famous semi-final at Villa Park, Peter Schmeichel saving Dennis Bergkamp’s penalty in injury time before Ryan Giggs’ wondergoal for the 10 men in extra-time.

“In the Premier League there were numerous comebacks and narrow victories in the run-in, including coming from behind on the final day to beat Tottenham Hotspur. And, of course, there were the memorable European nights, especially Roy Keane’s performance against Juventus in Turin and the amazing conclusion in the Nou Camp against Bayern Munich.

“The whole trip felt more exciting, even for those who did not especially want United to win. Every step of the way United were overcoming major obstacles, each one giving them the power to deal with the next. You knew you were watching history unfold.”

However, while Carragher is undoubtedly hoping that City crumble in the final weeks of the season and the Premier League trophy heads to Merseyside for the first time, he thinks that a dramatic turnaround in next weeks second leg against could be exactly what the Citizens need to go on to win all four trophies in their path.

“The good news for City is there is no hiding place now. A comeback on Wednesday will give us all the drama we are waiting for,” the Scouser predicted.

“By overcoming their deficit, City’s players will get the same feelings as the United squad in ’99 and Guardiola will have that iconic night he has craved to energise the club’s European ambitions.

“Victory can give City the momentum for the potentially decisive Premier League games with Spurs and Manchester United.

“City fans have enjoyed the luxury of sitting contentedly in their seat over the nine extraordinary months of this quadruple bid. Over the next 12 days they might start to join the rest of us on the edge of it.”

Read also: Who will win the Premier League? The Football Faithful team try to predict this season’s champions