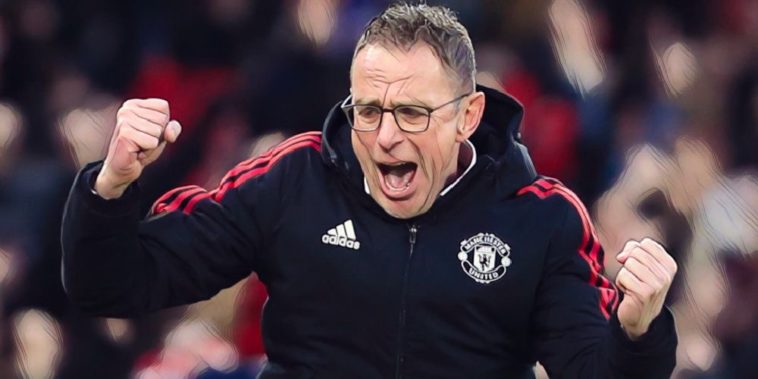 Jaime Carragher has admitted he was ‘impressed’ by Manchester United’s performance against Crystal Palace at the weekend, praising Ralf Rangnick for putting his ‘stamp’ on the side from the off.

Manchester United beat Arsenal on Thursday evening in what was Michael Carrick’s last game in caretaker charge, with Ralf Rangnick taking the reins for the weekend win over Palace.

While the German coach only had one training session to try start to get his pressing philosophy across to the players, United made discernible strides in their first outing under the 63-year-old.

United won the ball 12 times in the opposition half during the 1-0 win, five more than any other game all season, while it was also just their third Premier League clean sheet of the campaign and their first at Old Trafford.

12 – Man Utd won possession in the final third 12 times against Crystal Palace today, at least five more occasions than they managed in any other Premier League game this season. Ethos. pic.twitter.com/pILc0I9K0G

United’s greater intensity and organsiation was a stark contrast to most of the performances that were produced throughout the tenure of Ole Gunnar Solskjaer, and Jamie Carragher praised Rangnick for putting his stamp on the side from the off, likening his impact to that of Jurgen Klopp and Thomas Tuchel following their arrivals at Liverpool and Chelsea respectively.

“I was impressed with Manchester United,” Carragher said on Sky Sports. “From the fact Rangnick put a stamp on the team from day one.

“The top managers – certainly these German managers that have come in when the season’s already started – they put the stamp on their team in game one, Tuchel and Klopp, two of the best managers in Europe.

“Whatever you say about United’s performance yesterday, Rangnick put that stamp on his team.”