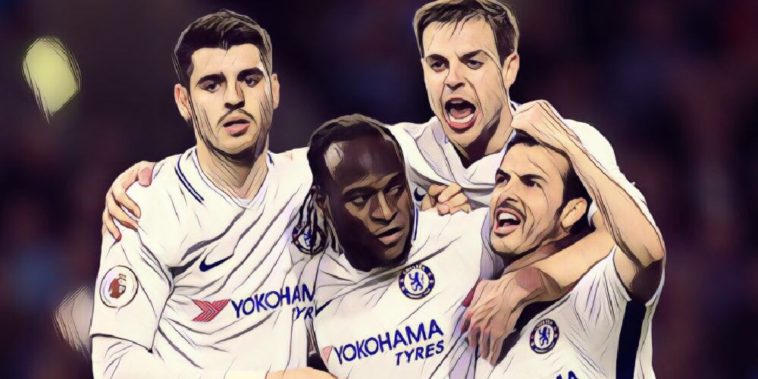 A rotated Chelsea side managed to see off an in-form Burnley side with a 2-1 victory at Turf Moor.

The Clarets gifted Chelsea the first goal as a cross from Victor Moses was missed by the Burnley goalkeeper Nick Pope which led to Kevin Long inadvertently knocking the ball into his own net. In the 64th mintue A Johan Berg Gudmundsson strike deflected off of Ashley Barnes to give the home side the equaliser. Then five minutes later Moses made his presence felt once again by bagging the winner for the blues.

Rotation pays off for Chelsea

Chelsea made six changes to their starting line up with the most notable exclusions being Eden Hazard and Willian. This was of course due to the upcoming FA cup semi-final game on Sunday.

Resting your best players is always a risk, especially when Chelsea still has a very slim chance of catching Tottenham and getting in the top four. It managed to pay off for the Blues however as they picked up the three points and also got to rest some of their key players.

Much of the talk prior to the game was the inclusion of both Alvaro Morata and Olivier Giroud in the Chelsea starting line-up. As Sky Sports pointed out this was the first time since 2011 that the Blues had started a game with two strikers.

The decision for this was mostly because of the rotation in the team however Conte could’ve put Ross Barkley in the line-up and kept the usual system.

With Hazard and Willian being in great form this season, Morata and Giroud were going to have to play extremely well to make this formation change permanent. They did pretty well as a tandem in the first half with the duo combining well to create chances for each other.

This somewhat faded after the break when Morata’s performance levels dipped, and he missed a huge chance when he went through one-on-one with the keeper, only to put the ball wide. It was the sort of chance that you expect top strikers to put away and it epitomised the second half of the season that the Spaniard is having.

Chelsea actually improved when Morata was replaced by Hazard and Chelsea moved back into a more familiar shape. This further identified that their usual system is the best choice for the London club. So it’ll be interesting to see who plays as the main striker in the FA Cup semi-final on Sunday, but on current form it should really be Giroud.

Chelsea didn’t hurt their chances of a top four finish but it’s still doubtful that they’ll manage it. They remain five points behind fourth placed Tottenham with only four games to go. Although they did show great spirit to bring themselves back into the lead after getting pegged back by Burnley. This shows that they are still willing to fight for that unlikely fourth spot until it is mathematically impossible.

Burnley on the other hand missed their chance to catch up to Arsenal. As with Manchester City winning the League Cup as well as confirming their place in the Champions League through their league position. That means that sixth place in the Premier League gets into the Europa league.

They still have time to catch Arsenal, but they may not need to as if anyone of the last four teams besides Southampton win the FA Cup then qualification for the Europa League gets given to the team in seventh place in the Premier League, which just so happens to be the place the Clarets currently occupy.

Moses was the main man against Burnley

With Hazard and Willian on the bench Chelsea needed someone to step up and be a match winner, that man was Victor Moses. He was a thorn in the side of Burnley all game on that right flank as he was a constant danger and his defensive game was top notch too. He caused the own goal with his run into the box and his cross.  Then for the second it was a great first touch and a nice finish that won the game for the away side.

He was a substitute last week in the 3-2 win against Southampton as he’d not been in the best of form of late. However, he reacted well here and given himself a great chance at playing in the FA Cup on Sunday.

The best part of this Burnley side all season has been their defence and goalkeeper but they were both at fault for the first goal against Chelsea. The defence was caught out by a simple ball through to Moses as nobody tracked his run. Then the goalkeeper Nick Pope tried to stop the cross from going across his goal, but he missed the ball and it hit Kevin Long and went in.

Pope did a good job at recovering for the rest of the game as he didn’t really make any more mistakes after that, but the damage was already done.

As for the defence they got caught out plenty of times by the running of Victor Moses in particular and then couldn’t get anywhere near Hazard when he came on. Hopefully for Burnley’s sake, this was just a one off, but on this occasion, it cost them the game.