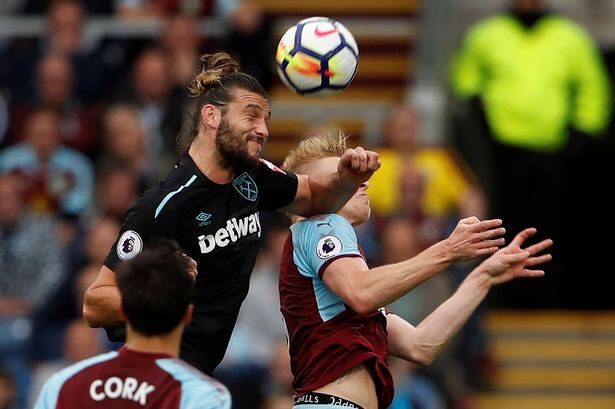 A first half goal from West Ham’s Michail Antonio was cancelled out in the 85th minute by a Chris Wood equaliser, rescuing a point for the home side.

West Ham played the majority of the match with ten men after Andy Carroll was sent off in the 27th for a second yellow card. Both bookings were picked up in quick succession for seemingly elbowing Burnley defenders, Ben Mee and James Tarkowski, while challenging for high balls.

Having to play for so long with a man less, the visitors were obliged to defend stoutly for long periods of the game. West Ham manager Slaven Bilic was unhappy with Carroll, and said after the match that the forward should have shown more composure, especially as he was sent off only 90 seconds after picking up his first yellow card.

The home side struggled to break down a well organised ten-man West Ham side until Wood’s late intervention. They have now only managed two goals at home in four matches, at Turf Moor so far this season.

Clarets boss Sean Dyche has maintained he is not concerned how or where his side’s points are acquired, but it is a problem he will need to address.

For the Hammers, they will feel this was a game they should have won, especially after Antonio slotted home an early goal after 19 minutes.

However, after the Carroll dismissal the visitors offered little offensive play and in the end getting an away point was a good performance.

Burnley face a trip to free-scoring Manchester City on Saturday, 21 October. West Ham are in action on Friday, 20 October when they host Brighton in an evening kick-off at the London Stadium.