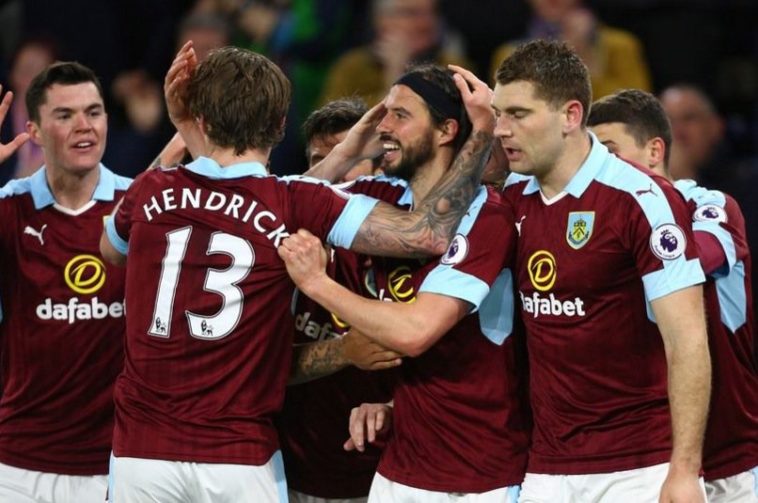 The Scot’s goal gave Burnley their 10th home win of the season, which eclipses Manchester United and City’s home records; no mean feat.

Burnley didn’t have it all their own way though. Stoke were dominant for large parts of what can only be described as a ‘scrappy’ game.

The first chance of the game fell to Marko Arnautovic. The Austrian was sent clean through on goal, but a poor touch enabled Tom Heaton to capitalise and quell the threat.

Charlie Adam was next to try his luck for the Potters. His glancing header from Arnautovic’s corner forced a save out of Heaton.

Adam again tried in vain to break the deadlock. His burst from midfield opened up a sight of goal, which he duly accepted, but his strike was comfortable for the Clarets’ stopper.

Arnautovic was then sent through on goal again, but he baffled the crowd by looking for a pass, when the goal was gaping. A huge chance wasted for Stoke.

After a subdued first half for Burnley, Jeff Hendrick injected some life into the Clarets on 58 minutes.

He picked up the ball 35 yards from goal and drove towards the box. After beating both Joe Allen and Charlie Adam he cut the ball back to an unmarked Boyd, who swept home. Turf Moor was rocking again.

Who knows how big of a goal that will turn out to be from Boyd, but one thing is for certain it was a timely goal, which would eventually pull the Clarets away from the relegation scrap.

Ashley Barnes came closest to a second goal in stoppage time, but Robbie Brady’s cut back was fired over by the substitute.

Stoke never really showed signs of getting an equaliser, which will certainly worry Mark Hughes. However large credit must got to the Burnley backline for nullifying the Stoke attack. The defenders were immense once again.

Victory moves Burnley onto 35 points and within touching distance on safety, but the job is not done yet. A win for Hull tonight and the whole complexity changes yet again.

Burnley can not take their foot off the gas. They travel to Middlesbrough on Saturday and should be looking to get the three points. If they succeed, the Clarets Premier League status should be safe for another season.

As for Stoke, it wasn’t a bad performance. They just lacked conviction in front of goal, and the final pass was missing. Had Arnautovic taken the chances he had, it would definitely have been a different game.

Stoke fans have been calling for the head of Mark Hughes, which is maybe a little bit unfair, but this result certainly wont have done anything to help the former Blackburn boss’ cause.