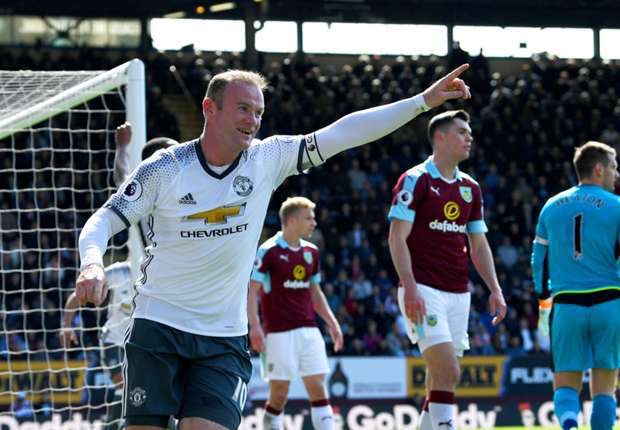 Manchester United kept up the pressure on the top four with a 2-0 win against Burnley, who slumped to a third successive defeat.

From minute one to minute 90, the Clarets were lacklustre to say the least. They didn’t threaten the United goal once in the entirety of the game, failing to register a shot on target.

United were dominant throughout – even without Zlatan Ibrahimovic and several other first team regulars.

The first half was very one sided and Manchester United nearly took the lead inside 15 minutes. Anthony Martial broke into the box and pulled the ball back to Wayne Rooney, but his effort was blocked six yards out by Ben Mee.

United did make their dominance count inside the half hour though. Burnley lost the ball high up the pitch and the Red Devils broke quickly through Anthony Martial. A neat one-two with Ander Herrera put the Frenchman clean through on goal and he made no mistake in slotting past Tom Heaton.

Returning Captain Wayne Rooney doubled United’s lead on 39 minutes. Martial was again involved, after his shot was blocked by Heaton. The ball broke to Rooney who squeezed the ball through Keane’s legs and it just crossed the line. Rooneys 251st goal for United.

The second half begun as the first ended; with United in the ascendancy. Paul Pogba, who was quiet for most of the game, tried his luck from 25 yards, and he forced a smart save from Heaton.

It was a game of relatively few chances, with the last chance falling to Marcus Rashford, who was played through on goal from the right hand side, but he couldn’t beat Heaton on his near post.

What the result means for both sides

The defeat, combined with Saturday’s results, leaves Burnley firmly in the relegation mix up, and this will worry Sean Dyche. The Clarets created nothing, and the spirit that used to be so prevalent after falling a goal behind, was nowhere to be seen. You get the feeling that confidence is on the floor.

Something needs to change fast, whether that is personnel or formation, that’s for Dyche to decide, but he needs to freshen the side up for Saturday’s HUGE game against Crystal Palace.

Jose Mourinho will be more than satisfied with the three points and belief will now be flowing through the United ranks. They can now believe they are capable of coping without the injured Zlatan Ibrahimovic.

They were never threatened at all by Burnley today and controlled the game for 90 minutes.

Their focus now turns to huge game against Man City on Thursday, which will most likely decide who finishes in the top four.