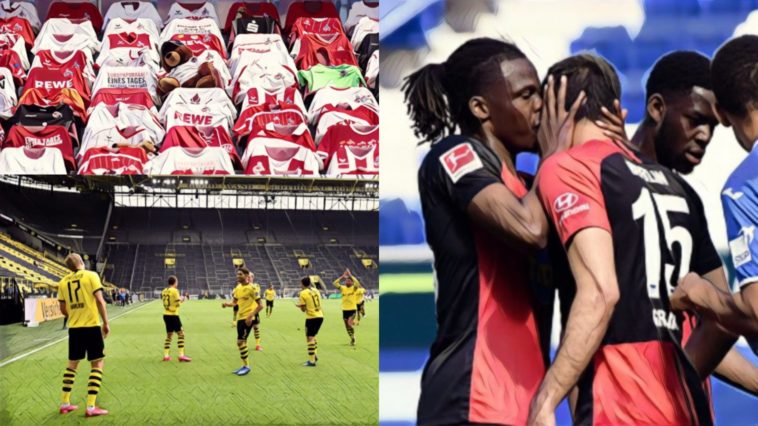 Willkommen to The Football Faithful’s first ever Bundesliga edition of our weekly awards column, where we rewards the best and worst of the weekend’s football action.

The German top flight is the first of Europe’s major leagues to return following the outbreak of the coronavirus earlier this year, giving hope to other countries that some semblance of normality may be returned to sport. Let’s recall a strange, but welcome comeback for the Bundesliga.

This past week’s best moment was simply the return of football. We’ve all been doing our best to get by without top level football in our lives by resorting to nostalgia-filled binges on past matches, searching for streams of the Belarusian Football League or watching the return of the K-League on YouTube. But it couldn’t compare to seeing a major league like the Bundesliga get back in action.

We asked #effzeh fans if they wanted to hand over their lucky scarf or kit to be placed in the stadium for the upcoming games.

It’s not the same as you being there and it never will be, but thank you ❤️⚪️ pic.twitter.com/oRbXOKSerp

Jadon Sancho may have been limited to a cameo appearance on Saturday, but Borussia Dortmund eased to their 800th Bundesliga win by destroying a limp Schalke side in the Revierderby.

Erling Braut Haaland was brilliant as per usual, as was Thorgan Hazard, but Julian Brandt pulled the strings on the day in a display of true class by the German. His two assists were only part of the story as he caused trouble for the local rivals all day long on the left hand side.

This pass by Julian Brandt…

How Borussia Dortmund were resurrected from the brink of financial ruin

Pierre Kunde was sporting an Adama Traore-esque hair style at the weekend, which evidently inspired him to make a powerful run into the FC Köln box on Sunday, beat several defenders and score Mainz’s equaliser in the second half. Although it was a brilliant goal from the Cameroonian, the home side were caught completely flat footed in giving up their two goal lead.

It’s also worth mention Erling Haaland‘s brilliant finish on Saturday, which he made look easy but was in fact a difficult enough shot to take on. The young Norwegian is now on 41(!) goals for the season.

Defensive action of the Week

Eintracht Frankfurt may have been on the receiving end of a spanking from Borussia Mönchengladbach, but that didn’t mean it was time for Martin Hinteregger to just down tools and accept his fate. Instead, he pulled out this inspiring last ditch clearance to stop his side conceding a fourth to the visitors.

Frankfurt may have lost, but Martin Hinteregger certainly won save of the day 👏👏👏#BundesligaIsBack pic.twitter.com/zqByljJrQw

Five British players with the biggest impact on the Bundesliga

RB Leipzig’s finishing as a whole was poor against SC Freiburg, but Ademola Lookman missed a golden chance from six yards out that would have ultimately given them all three points. The fortune of he and his teammates was summed up by this moment from the former Everton attacker:

Amazing. With barely anyone in the stand Ademola Lookman still manages to clock a cameraman on the head with a shot 😂

Look, we’re all excited about the return of football. The Hertha Berlin players were even more excited to win 3-0 at the weekend. But Dedryck Boyata probably got a little too excited by their 3-0 win over Hoffenheim when he decided to kiss a teammate after the game.

Dedryck Boyata insists he was “explaining a set-piece” to Marko Grujic after he was accused of flouting social-distancing advice and placing a kiss on his Hertha Berlin team-mate. pic.twitter.com/NR1RW4jKzy

“We have to be careful not to act like choirboys now,” his manager Bruno Labbadia said after the game. “Hertha haven’t always scored three goals in the past. There was joy, don’t take it out of proportion. Don’t get hysterical,” he warned.