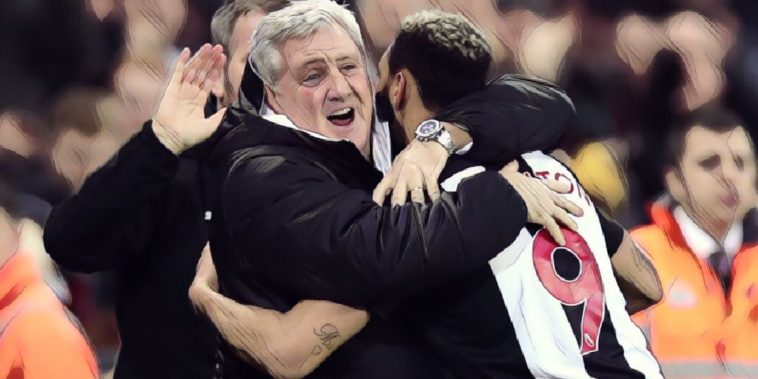 Newcastle United cruised through to the fourth round of the FA Cup after a comfortable 4-1 win over Rochdale at St. James Park.

Having been held to a 1-1 draw at Spotland’s 10 days ago, Newcastle made no mistake at the second time of asking, Eoghan O’Connell’s 17th minute own goal putting Steve Bruce’s side ahead, before Matty Longstaff and Miguel Almiron quickly put the Magpies 3-0 up before the half-hour mark.

£40 million forward Joelinton made it four with just eight minutes to play before Jordan Williams pulled one back for The Dale just four minutes later.

However, it was too little, too late for the League One side, with Newcastle going through to the fourth round where they will face Oxford United, and speaking afterwards, Bruce insisted he was ‘never worried’ about Newcastle number 9, Joelinton, after the Brazilian netted his first goal in 20 outings.

“It’s a hard job to play here. There’s an expectation on you and if you’ve got a big transfer fee and you’re young, sometimes it becomes difficult,” Bruce said in his post-match press conference.

3 – Matty Longstaff has now scored three goals in eight starts for Newcastle in all competitions this season; indeed, only Jonjo Shelvey (5) has netted more for the Magpies in 2019-20. Future. #EmiratesFACup pic.twitter.com/EvqmrHvpuf

“I never worried because I could see him in training and you can see what he’s got.

“Lets hope it just gives him that bit of confidence. You saw the difference in him at the end. I was worried sick he was going to jump on me because that would have done me in. It was just shouting in Portuguese, I don’t know what the hell he was saying.”

Speaking about Paraguay international Almiron, who had previously struggled badly since his move from the MLS 12 months ago, Bruce admitted he was ‘relieved’ to see the one-time club record signing finally come good.

“I defended Almiron and was asked same question week in and week out and now he’s got four in seven,” Bruce said.

“You could see within five minutes what a difference it made to Almiron. He’s only young, he’s got a big burden to carry. We’re all relieved. He’s been part of nearly every single training session.

“He’d like to have done better than he has done but he will only get better. We were determined to leave him on and score a goal.”