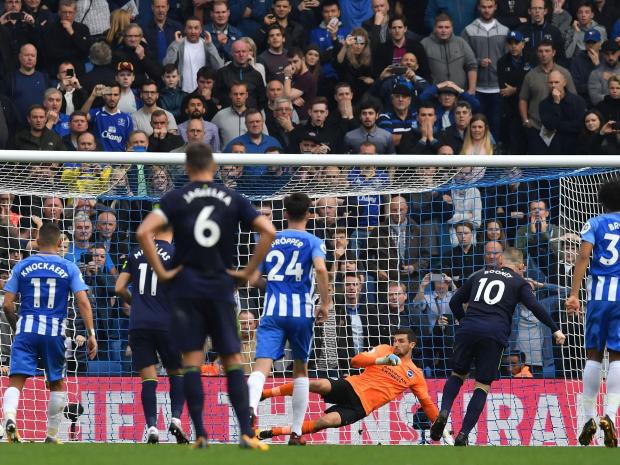 Points are shared at the Amex in front of a record crowd as the slow starting game had an eventful end continuing Everton’s away blues.

The game came to life in the last 10 minutes as an Anthony Knockaert’s finish in the 82nd minute was cancelled out by a Rooney penalty in the 90th minute.

If it wasn’t for the last 10 minutes then this would have easily been a game to forget about. Everton started the first half well but then started to flounder as Brighton got back into the game. A repeat of this happened in the second half with Brighton looking the much more confident team throughout large portions of the game.

Everton’s two main chances of the half fell to Idrissa Gueye whose two shots from outside the area forced a save from Ryan before the second went agonisingly wide. As for Brighton they had a much quieter first half with their only real chance thwarted by a fantastic Michael Keane sliding block to prevent a shot from Dunk inside the area.

In the second half Everton once again started better and Holgate saw his shot across the goal saved by Ryan in the 53rd minute. In the 73rd minute Everton had another great chance when Dominic Calvert-Lewin chested the ball down well, but couldn’t provide the finish.

The game truly came to life in the in the last 10 minutes though. In the 82nd minute a Izquierdo shot at the edge of the box was once again blocked by Keane before falling to Pascal Gross in the box, he squared it to Knockaert who placed it in with his left foot to score his first goal of the season.

Then in the 87th Brighton came at Everton again as Pickford made a fantastic save from substitute Izzy Brown’s shot at the edge of the box with the game seeming to have swung in Brighton’s favour.

This changed in 88th minute when Calvert-Lewin was fouled by Bruno inside the area. The veteran seemed to have deliberately elbowed the youngster when the ball was in the air and was lucky to have not seen more than a yellow. The penalty was taken by Wayne Rooney since regular penalty taker Leighton Baines had been substituted.  The former Manchester United man coolly placed it into the keepers bottom right hand corner to bring the game level.

Everton then almost went on to win it with the last kick of the game from Mirallas, but a fantastic double save from Matt Ryan denied him both times and meant the Toffees would be returning to Merseyside with just the one point.

Overall, a draw was a fair result, both teams were fairly average throughout the game and both created chances that could have won the game. Everton will argue they should have had a penalty when Sigurdsson was pulled back in the box to prevent him having a shot but all in all the blues didn’t deserve the win.

The result means Brighton stay in 14th while Everton climb the table by one place into 16th.