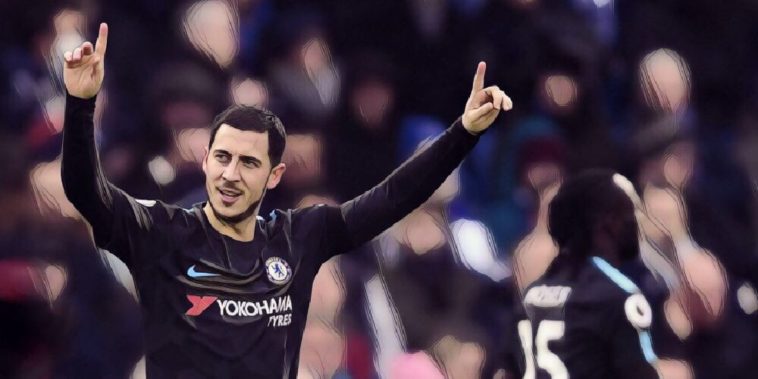 Eden Hazard scored a brace, while Willian and Victor Moses add on tallies of their own as Chelsea leave the Amex Stadium with a comfortable 4-0 victory over Brighton and Hove Albion on Saturday.

The combination of Hazard, Willian, and Michy Batshuayi were deadly up front, contributing three goals and two assists in the absence of key players.

Here are five things we learned from Chelsea’s win over Brighton.

Chelsea were missing six players to injuries and suspensions today, but the Blues still won in convincing fashion. They were missing their starting striker, midfielder, center-back, and goalkeeper. The key to victory was their quality in depth.

Had it not been for the unfortunate head injury to Andreas Christensen, Ross Barkley could’ve possibly made his Chelsea debut.

Even with key players missing, Chelsea started the match with a bang, and didn’t look back until the final whistle was blown.

You need to score to win

Brighton, before this match, had the best defensive record for Premier League clubs outside of the top seven. They had even conceded less than Arsenal in 23 games. Yet, they still found themselves in 16th place and only three points above the relegation zone.

Chelsea’s four goals were more than enough to comfortably get the win because of Brighton’s inability to score. It wasn’t without trying. Caballero made some key saves to keep the clean sheet while Ezequiel Schelotto and Tomer Hemed had penalty claims denied.

24 games played, and Brighton have only put 17 into the back of the net, the second-lowest total in the Premier League. In American football, there’s a quote from former Alabama Crimson Tide coach Bear Bryant: “Offence sells tickets, but defence wins championships.”

But in the Premier League, you have to score something to maximize points. 0-0 draws just won’t cut it, especially if Chelsea exposes your defence for four goals.

Three-at-the-back for the experienced only

When Antonio Conte came to Chelsea and brought the Italian three-at-the-back defence with him, other clubs tried to copy it when going up against him. Imitation is the sincerest form of flattery.

Last year, teams learned that this type of defence is a different beast. The difficulty of transitioning from a traditional back four was overlooked by many. This new defence is only for the experienced who have drilled it countless of times in practice.

Brighton have played 27 games in all competitions this season, but this was the first time they played with three center-backs. The Seagulls have generally played in a 4-4-2 or 4-4-1-1, and trying out a new formation contributed in conceding four against a formidable Chelsea attack.

Three-at-the-back is in vogue presently, but teams need to be prepared for growing pains as they try it out in Premier League action.

Today was a rare occurrence when I agreed with a referee. In the 58th minute, referee Jonathan Moss removed Christensen from the match after a clash of heads with Shane Duffy 10 minutes earlier. The Chelsea center-back was seen clutching his head before he was replaced by David Luiz.

It boggles my mind to see that Christensen returned to the match. Team doctors must have checked him out and deemed him able to continue, but the current concussion protocol needs to be strictly followed to protect players from further hurting themselves by continuing to play. I am glad Mr Moss was there to save Christensen from possibly making things worse.

It did hurt Chelsea to be forced to use a substitution on a referee’s discretion, but it was with his best interests. It would be a good sign of progression of the sport if teams could be allowed at least one medical substitution that didn’t count to the three tactical subs. Hopefully then, players will not attempt to play through injury for the sake of the team.

The end is near!

Chelsea have one match left on Wednesday before a well deserved week-long break. English football is always tough in the early winter months because of fixture congestion.

The Blues have played 19 games straight without a 7-day break in between. That will go up to 20 when they go to Emirates Stadium to take on Arsenal in the second leg of the Carabao Cup semifinals.

Conte has blamed fatigue for the lack of quality in recent weeks. With all the injuries Chelsea have suffered, and a rest will be more than welcome. Hopefully the Blues can finish on a high note by stamping their ticket into the Carabao Cup final with a win over the Gunners.