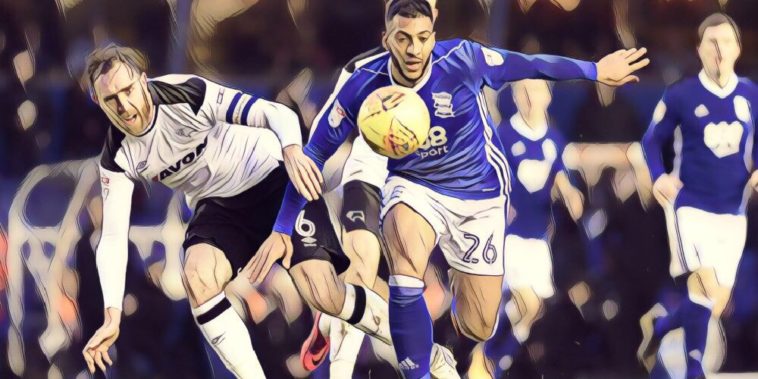 Derby County retained second place in the Championship table with another good win on the road on Gary Rowett’s return to St Andrews.

If you hadn’t have done your research before the tie you’d have thought Birmingham were the side looking at promotion this season. Steve Cotterill’s men flew out of the traps and came close with a couple of chances inside the first ten minutes.

Jonathan Grounds saw his effort hit the post, and it looked as if Birmingham could extend their unbeaten run to four games. However Derby did what they have done many times this season and kept solid, before finding a breakthrough after 19 minutes as Johnny Russell’s low shot deflected in off Harlee Dean.

Craig Gardner came closest to an equaliser for The Blues when his shot from outside the box had to be dealt with by Scott Carson, who had collected the Player Of The Month award for December this week.

In the second half Derby were rampant, and Tom Lawrence’s punt forward put Matej Vydra through on goal, who lashed the ball past Stockdale in the Birmingham net to double his side’s advantage. Johnny Russell forced a good save out of the keeper, but the tie was soon 3-0 when subs David Nugent and Andreas Weimann combined to condemn the home side to another defeat.

In 2015/16 when Gary Rowett was at the helm at St Andrews, Birmingham went to Derby and recorded an emphatic 3-0 victory, but the scoreline was the opposite way round this time as The Rams continue to look strong for promotion.

Up next for Birmingham is a trip to Deepdale to face Preston, whilst Derby host Bristol City in what could be a big game at the top of the table.