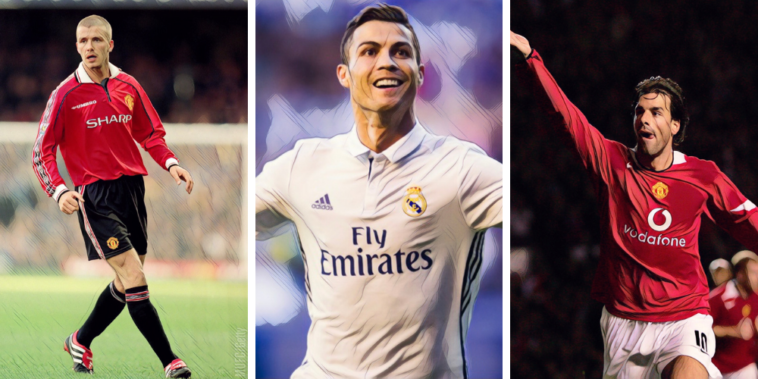 Manchester United and Real Madrid are two of world football’s biggest clubs and only a select few stars are fortunate enough to adorn the colours of both sides.

Raphael Varane became the most recent footballer to have played for both clubs following his summer switch to the Premier League, the centre-back signing for the Red Devils after a glittering career in the Spanish capital.

The France international is one of a number of stellar names to have represented both teams and we’ve decided to look at five of the best players to have played for Manchester United and Real Madrid.

David Beckham enjoyed a meteoric rise through the ranks at Manchester United to become a first-team star, coming through the club’s fabled academy system as part of a collection of Red Devils’ youngsters dubbed the Class of ’92.

The midfielder won a domestic double in 1995/96, before shooting to wider prominence in spectacular fashion with a half-way line goal against Wimbledon on the opening day of the following campaign.

Beckham’s sensational strike was just one exhibition of the flawless technique that made him one of the best set-piece takers of his era, finishing as the Premier League’s leading assist provider on three occasions.

He won six league titles, two FA Cups and the Champions League amongst his honours, being named as runner-up for the Ballon d’Or following the Red Devils’ treble success in 1999.

Beckham made 394 appearances for United, scoring 85 goals and providing 101 assists, before a falling out with Ferguson – unhappy with his ever-growing celebrity status – led to a move to Real Madrid.

His arrival at the Bernabeu came amid the club’s famous Galactico recruitment policy, with Beckham joining Luis Figo, Zinedine Zidane and Ronaldo in the Spanish capital as Real Madrid spent big on the game’s biggest names.

He made 118 appearances in all competitions for Los Blancos, winning the La Liga title in his final campaign before a move to MLS.

Manchester United’s pursuit of Ruud van Nistelrooy proved a long one following a serious knee injury, but the forward proved worth the wait after making an instant impact in the Premier League.

Van Nistelrooy scored on his debut in the Charity Shield and failed to stop scoring from then on, netting 23 league goals during his first season in English football to be named as the PFA Player of the Year.

He won the Premier League’s Golden Boot the following campaign as United won the title, finishing the season with 44 goals in all competitions – the joint-most ever scored by a Premier League player in a single season.

Van Nistlerooy was the ultimate penalty-box predator with an unrelenting desire to score goals, possessing a notorious single-mindedness around the opposition’s area.

The former Netherlands international scored a staggering 150 goals in just 219 appearances for the club, finishing as the Champions League’s leading scorer on three occasions for the Red Devils.

Van Nistelrooy signed for Real Madrid in 2006 and finished as Spain’s leading scorer in his debut season as the title was secured, though suffered injury problems during his latter years at the Bernabeu.

He spent three-and-a-half seasons with Los Blancos and scored 64 goals in just 94 games, a frightening rate of productivity for one of the most natural finishers of his generation.

Michael Owen arrived at Real Madrid in the summer of 2004 as one of Europe’s best forwards, having scored 158 goals and won the Ballon d’Or after coming through the academy system at Liverpool.

The England international joined Real Madrid’s increasing collection of Galactico additions and made a positive impression in Spain despite limited opportunities, the presence of Ronaldo and Raul restricting his role at the Bernabeu.

Owen scored 13 league goals in just 20 starting appearances, finishing the 2004/05 season with the best minute-to-goals ratio in La Liga and with 16 goals across all competitions.

However, he spent just one season in Spain before returning to the Premier League at Newcastle, signing for Man United on a free transfer four years later after an injury-hit spell at St James’ Park.

His time with the Red Devils saw the declining forward feature in a bit-part role, though there were flashes of the Owen of old, including a Champions League hat-trick against Wolfsburg and a memorable last-gasp derby day winner against Manchester City.

One of the greatest footballers of all time and an iconic figure in the storied histories of both Manchester United and Real Madrid.

Ronaldo signed for the former as a teenager from Sporting Lisbon and enjoyed a remarkable evolution in the Premier League, a fleet-footed but often frustrating talent developing into arguably the game’s finest footballer.

Ronaldo enjoyed a breakout season in 2006/07, becoming the first player to win all six major individual Footballer of the Year awards in the same campaign after inspiring United to the first of three consecutive Premier League titles.

He scored an incredible 42 goals in all competitions the following season to win a first Ballon d’Or, as the Red Devils lifted a Premier League and Champions League double.

Interest from Spain predictably arrived soon after and Ronaldo eventually signed for Real Madrid in a world record £80m deal in 2009, where he reached extraordinary standards over the next nine seasons.

With Ronaldo and Lionel Messi vying for the title of the world’s best player at Spain’s biggest two clubs, the duo pushed each other on to reach unprecedented levels.

He moved on to Juventus in 2018 and spent three seasons with the Bianconeri, becoming the first player to finish as the league’s leading scorer in England, Spain and Italy.

Ronaldo scored over a century of goals for the Turin side before making a romantic return to Manchester this summer, rejoining the Red Devils as Ole Gunnar Solskjaer’s side seek a return to former glories.

The twinkle-toed Argentine formed part of the side that shattered records on their way to the title in 2011/12, becoming the first team to reach 100 points in a Spanish top-flight season and scoring a record-breaking 121 goals.

Di Maria’s creativity saw him provide 85 assists in just 190 appearances for Los Blancos, whilst he was instrumental in their Champions League success during the 2013/14 season, being named as man of the match in the final win over Atletico Madrid as ‘La Decima’ was secured.

The winger was surprisingly allowed to leave that summer in a British transfer record deal, signing for Manchester United following a £59.7m bid from the Red Devils.

He initially began brightly in English football and scored a stunning chip in a thrilling defeat at Leicester early in the season.

However, the Argentine soon became unsettled and left for Paris Saint-Germain after just one season, whilst his comments on the club and city since leaving have done little to endear him to the Old Trafford faithful.