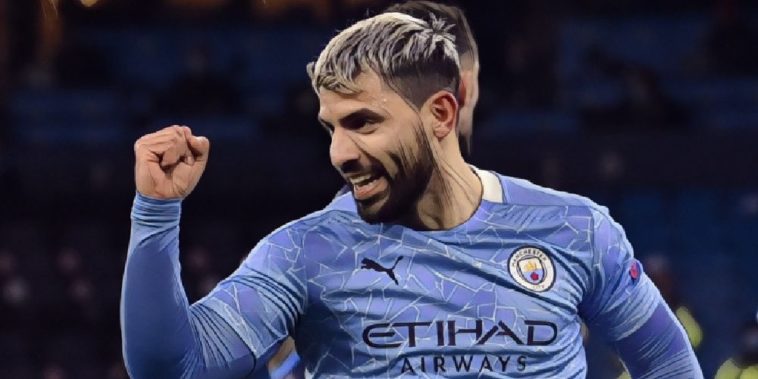 Sergio Aguero quickly rediscovered his goalscoring touch after making his latest comeback from injury as Manchester City ran out 3-0 winners over Marseille.

Manchester City started in their usual dominant fashion, as Marseille struggled to deal with the hosts high tempo in the opening 20 or so minutes.

However, following an injury Eric Garcia, the French side seemed to grow into the game as they created a number of decent chances of their own though without really testing ‘keeper Zack Steffen.

City came out of the blocks quickly after the break though, Ferran Torres netting just three minutes into the second half, Riyad Mahrez creating the goal as he drifted in from the right with a direct run towards the box before slipping it into the path of the Spaniard who slotted into the bottom right.

City have had to make do without club-record goalscorer Sergio Aguero for a large part of the season thanks to a number of injuries, but having been introduced as a 66th minute substitute, the Argentine wasted no time to get back to goalscoring ways by pouncing on a loose ball after Nathan Ake’s header was saved.

He marks his return with a goal. pic.twitter.com/mu7XVpu61v

Raheem Sterling wrapped up the scoring in the 90th minute, the England international taking advantage of an unfortunate deflection off Alvaro Gonzalez following a Mandanda save, leaving the 26-year-old to smash home from all of a yard.

The result saw City finish Group C with 16 points- the joint-most of any English side in a single group stage – while they only conceded one goal in their six group games, and Man City playmaker Bernardo Siva has already set his eyes on reaching the latter stages of the Champions League, the Citizens looking to finally get past the quarter-finals under Pep Guardiola.

“It was a good game we knew we have already got first spot in group and we are already qualified but it’s always very good to finish the group stage with a good win, 3-0 at home. Onto the next one,” he told BT Sport.

“It’s a good start for us – we know it’s not enough but it’s a very good start. We’re into the last 16 and our goal is to do better than we did in the last three seasons and that’s what we will try to do.”

Speaking about the return of Sergio Aguero – the striker having been restricted to just three starts so far this season – Silva added: “Very happy, everyone knows how important he is for us.

1 – Manchester City conceded just one goal in the UEFA Champions League group stage this season, the joint-fewest by any side in a single group stage in the competition, and the fewest by an English side since Man Utd in 2010-11. Clinic. pic.twitter.com/5ra0nglesq

“He is one of best players to ever play for this club, he’s a goalscorer and a fantastic guy to have in the dressing room as well. Good to have him back.”

Next up for City is the small matter of a Manchester derby at Old Trafford, Manchester United having struggled for results at home so far this season, and Silva is hoping the maintain their recent ‘momentum’.

“It’s been a few games that we’ve been winning, when you win its easier to go into the next game and win again and win again. So to have these games in a row winning of course it’s very nice and we just want to keep the momentum going we know we have a tough game against Manchester United at the weekend and we want to just keep winning.”

Muppets! Picking an XI of footballers who royally pissed off their own fans