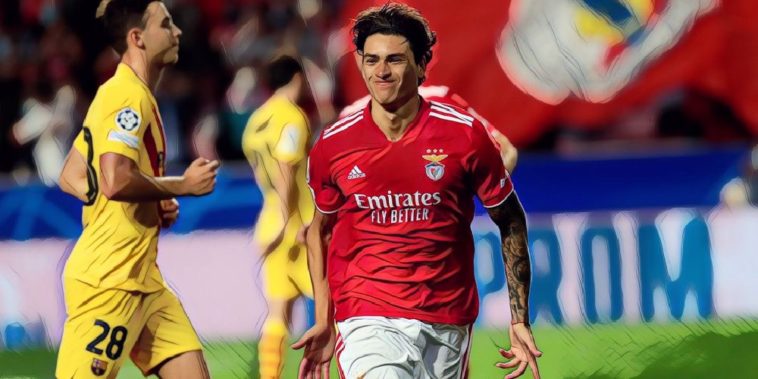 Benfica have confirmed that the club have reached an agreement to sell Darwin Nunez to Liverpool in a deal which could reach a club record figure for the Reds.

Liverpool are closing in on the signing of Nunez from the Portuguese side, having agreed an initial fee of €75m for the 22-year-old, who scored 34 goals in 41 appearances for Benfica last season.

Nunez is set to undergo a medical on Monday ahead of signing a six-year deal at Anfield, whilst the deal could rise to €100m (£85m) with performance-based add-ons, a figure which would exceed the £75m record signing of Virgil van Dijk from Southampton in 2018.

A statement on the Benfica website reads: “In the early morning hours of this Monday (0:44 am), Sport Lisboa e Benfica – Futebol, SAD informed the Securities Market Commission (CMVM) that it had reached an agreement with Liverpool FC for the sale of all rights to the player Darwin Nunez, for the amount of €75m.

“To the CMVM, Benfica’s SAD also informed that the agreement provides for the payment of a variable remuneration, so the global amount of the sale could reach the amount of €100m. It is further informed that the aforementioned agreement is dependent on the signing of the player’s sports employment contract with Liverpool FC.”

The Uruguay international has emerged as one of the most in-demand forwards in Europe after a prolific season in Portugal, one which included scoring in both legs of Benfica’s quarter-final defeat to Liverpool in the Champions League.

His arrival could pave the way for Sadio Mane to leave Liverpool, with the Senegal international having expressed a desire to leave in search of a new challenge. Bayern Munich are interested and the Bundesliga champions have already seen an offer worth £30m rejected.

Elsewhere, Divock Origi has already confirmed his departure at the end of his contract, whilst there is interest from Premier League rivals in Takumi Minamino.

Roberto Firmino and Mohamed Salah will also enter the final seasons of their contracts in 2022/23.