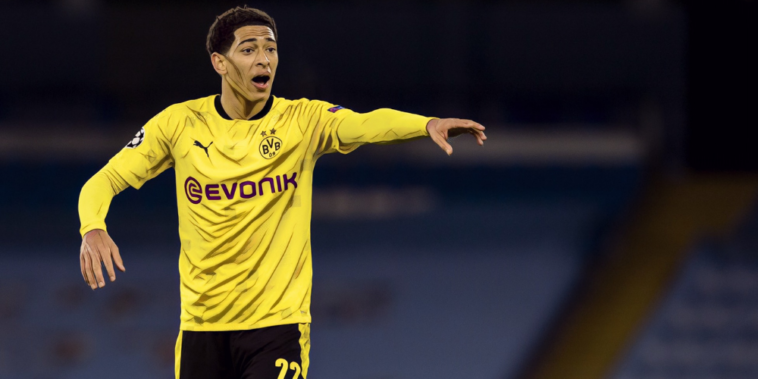 Jude Bellingham has been backed for a starting role for England at this summer’s European Championship after the midfielder’s impressive performance against Manchester City in the Champions League.

Bellingham became the second-youngest player ever to start a Champions League quarter-final during Borussia Dortmund’s 2-1 defeat at the Etihad, producing a confident display and proving his ability to compete at the highest level.

The 17-year-old had a goal controversially ruled out after dispossessing Man City goalkeeper Ederson and played an influential role in Marco Reus’ equaliser for the Bundesliga side.

Bellingham’s performances made an impression on former England midfielder Owen Hargreaves, who believes the youngster’s all-round ability will ensure he starts for the Three Lions at this summer’s Euros.

“I think Bellingham will start for Gareth at the Euros,” Hargreaves declared on BT Sport. “His all-around game is so good, he plays like a grown man. He’s already a star and he’s going to be one of the best in a short time.”

Hargreaves insists Bellingham’s limited experience matters little given his quality, describing the teenager as a ‘special’ talent who can provide England with more ‘power’ in midfield.

He believes Southgate has a selection of ‘unbelievable options’ to choose from in midfield, but has no doubt that Bellingham – who has won two senior caps – can already be a starter for the national side at a major tournament.

“Bellingham has got the lot, he’s special. He gives you a bit more power in the midfield.” Hargreaves added.

“Mason Mount’s going to start. If you play Declan [as a holding midfielder] and Bellingham just in front…Gareth has unbelievable options but Bellingham is playing in a Champions League game like this.