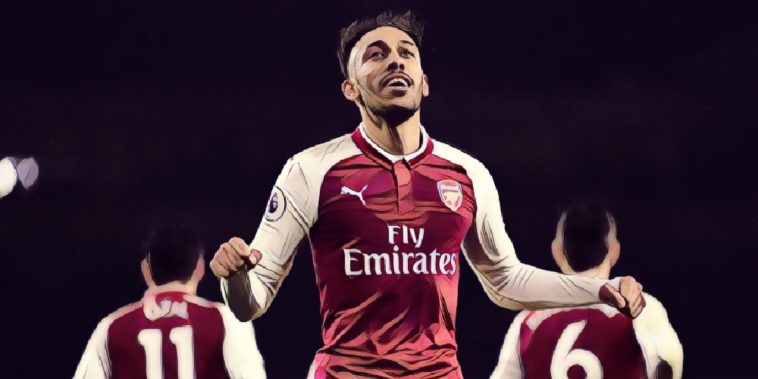 Pierre-Emerick Aubameyang was one of the most distinguished strikers in Europe during his free-scoring spell in the Bundesliga with German juggernauts Borussia Dortmund. His transition to playing in the Premier League with Arsenal has been far from smooth, but the evidence during his performance against Stoke City on Sunday suggests he’s finally beginning to acclimatize to life in England.

Aubameyang amassed an astounding tally of 141 goals in 213 appearances in all competitions for The Black & Yellows, and also stole the German Bundesliga Golden Boot away from Bayern Munich talisman Robert Lewandowski at the end of the 2016/17 season.

His tally of 31 goals was the highest amount scored by an individual in a single German Bundesliga season since FC Koln striker Dieter Muller’s record of 34 goals in 1977. This further emphasises the quality and calibre of player Arsenal have at their disposal in the shape of Pierre-Emerick Aubameyang.

Arsenal are enduring a torrid season in the Premier League, and are currently swimming 13 points adrift of UEFA Champions League qualification in sixth-place. Aubameyang was supposedly set to swoop to their rescue, but another string of defeats heightened the criticism facing consistently under-fire manager Arsene Wenger.

Borussia Dortmund grew frustrated with Aubameyang’s dissatisfaction at the Signal Iduna Park and allowed him to join Arsenal during the January Transfer Window. He made an instant impact for The Gunners by scoring in a convincing 5-1 win over Everton in the Premier League in early-February, but a barren run of three matches without a goal led to early questions being asked of the 28-year-old.

The Gabon international subsequently ended his brief goal scoring drought with a consolation strike against Brighton & Hove Albion, but four of his opening five appearances in England ultimately ended in defeat. This was also the first time Arsenal had lost four successive matches in all competitions since October 2002, but they’ve since been inspired to successive league wins over Watford and Stoke City respectively to temporarily silence disgusted sections of supporters.

The supporters remain divided on the future of Arsene Wenger, but the recovery of Aubameyang has offered some reprieve to the Frenchman who lured him to the Emirates Stadium in January. Unfortunately, Aubameyang is ineligible to participate in Arsenal’s UEFA Europa League campaign this season, due to his former club Borussia Dortmund also competing in this season’s edition.

He’s also demonstrated an admirable act of selflessness during Sunday’s morale boosting victory over relegation strugglers Stoke City. Alexandre Lacazette, who has experienced a reduction in playing time since Aubameyang’s arrival, had failed to score since 20 January heading into the early afternoon kick-off.

Aubameyang was on the verge of completing his first Premier League hat-trick, after converting the opening goal from the penalty spot and completing his brace from open play. Arsenal were awarded a second penalty in the dying embers of the game, but Aubameyang graciously handed penalty duties to the Frenchman to end his barren run of over two months without a goal in all competitions.

This suggests Aubameyang is prepared to sacrifice his individual achievements for his own teammates, which is exactly the type of characteristics Wenger’s squad is currently craving. He’ll have to prove himself against more prestigious opposition to establish himself completely in the Premier League, and he can achieve this when The Gunners visit second-place Manchester United on 29 April.

The UEFA Europa League is seemingly Arsenal’s only route to UEFA Champions League qualification, and Aubameyang will be crossing his fingers when watching his team-mates battle against Russian outfit CSKA Moscow this evening. It’ll be a bitter pill to swallow if a player boasting the quality that Aubameyang possesses isn’t competing in Europe’s most prestigious competition next season.

After a difficult start to life in the Premier League, Pierre-Emerick Aubameyang has finally sparked to life in the famous red and white strip of Arsenal. His tally of five goals and one assist in seven appearances in all competitions is still impressive however, and it’ll only be a matter of time until Aubameyang infects the Premier League with his true brilliance and ability to score goals at will.