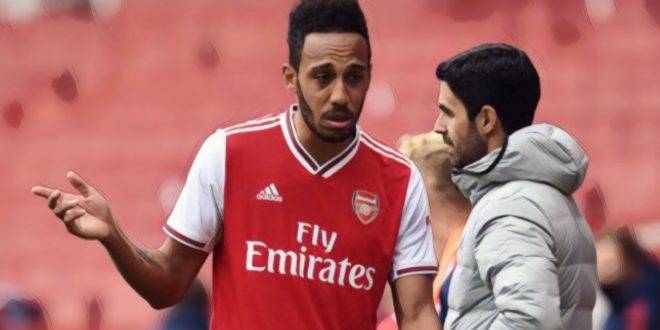 Pierre-Emerick Aubameyang has outlined his ambition to challenge for the league title as Arsenal continue their improvement under Mikel Arteta.

Arsenal may well have ended the season down in eighth last season – their lowest league finish for a quarter of a century – but they have shown notable improvements since the arrival of Arteta, the Spaniard having made moves to fix the clubs long-standing frailness and fragility.

Arteta has already steered the club to FA Cup and Community Shield success, and they have started the 2020/21 campaign in decent fashion too, beating Fulham and West Ham in the league before knocking Leicester out of the Carabao Cup.

Speaking ahead of Monday night’s high-profile clash at Anfield against champions Liverpool, Gunners skipper Aubameyang is hoping the north London side can ‘compete’ towards the top end of the division, this season their fourth consecutive campaign without Champions League football.

“When you win trophies, you want to win more trophies and this is what it’s about,” Aubameyang told Sky Sports. “We want to compete, first of all for the league, I think this is the biggest point. We want to be back in the Champions League, we have to stay humble for sure.

“I think everyone has one goal – to go forward and bring back the club to where it belongs. It’s now a few years since we’ve played in the Champions League, for example, and for me and all the club, it hurts – not just a little bit but a lot.”

Aubameyang recently signed a three-year deal at the Emirates, saying he would like to be remembered alongside club legends such as Thierry Henry, Dennis Bergkamp and Ian Wright, but believes he would need to win the Premier League title to be regarded in such high esteem.

“Hopefully win a league. I think this is very easy to answer but for sure, yeah, I need to win the league but I still have work to do and I feel far from those legends, but at the same time I know that I can reach it.”

The Gabon international also revealed how Mikel Arteta immediately set about transforming the side’s mentality by making them work together and tidy a room.

“When he came, the first day, we were in a room where I remember there were some chairs on the floor, everywhere in the room,” Aubameyang said. “So he brings the players, the staff and all the people working here and he said ‘this is the club right now, so you’re going to work altogether and first of all, clean this room, and then we’re going to talk.’

“After this you think ‘OK, I think he’s right, and we’re going to follow this way’ and this is how he made it and we have a lot of respect for him because he was a player as well. When you have a coach who knows what they’re doing, you just have to follow.”

Klopp: Arsenal better than eighth in the ‘open race’ for the Premier League