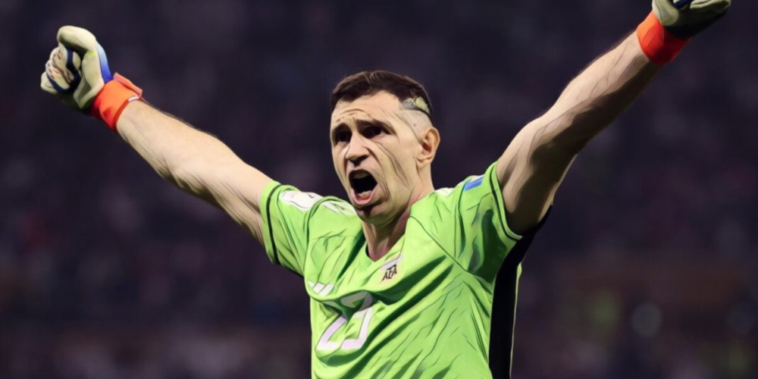 Aston Villa are said to be braced for interest in Emiliano Martinez following his role in Argentina’s World Cup triumph.

Martinez had an integral role in Argentina’s victorious campaign in Qatar, with the 30-year-old awarded the Golden Glove award as the World Cup’s best goalkeeper.

He was the hero of penalty shootout wins against the Netherlands and France, and made a brilliant last-gasp save to deny Randal Kolo Muani with the scores level against the latter in the final.

Bayern Munich are understood to be considering an approach for Martinez after Manuel Neuer was ruled out for the rest of the season, while Manchester United have also been linked. The Mail are reporting that Villa are braced for interest in his services as the January window approaches.

However, Villa are under no pressure to sell with Martinez on a long-term contract that makes him one of the club’s best-paid players. He has regularly spoken of his happiness at Villa Park, though the player’s agent, Gustavo Goni, this week discussed the prospect of a move to a Champions League club.

“He’s a great goalkeeper, the best in the world,” Goni said in an interview with Italian media.

“Not many clubs could afford a goalkeeper like him. Serie A clubs? Well, why not? Clearly he’s aiming high, at the Champions League.”

Martinez signed for Villa in a £20m deal from Arsenal in 2020 and was named as the club’s Player of the Season during his debut campaign.

He made his senior debut with Argentina last year and helped La Albiceleste to Copa America success in 2021, winning the tournament’s Golden Glove, before repeating the feat at the World Cup in Qatar.