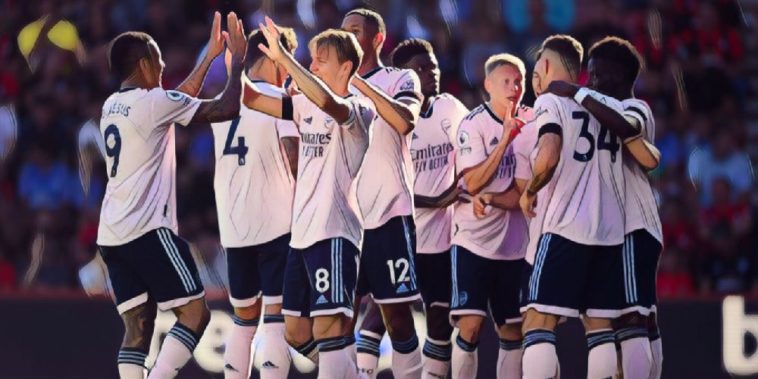 A Martin Odegaard brace helped Arsenal on their way to a 3-0 win over Bournemouth to maintain their perfect start to the season.

Arsenal came into the game as one of only two sides in the Premier League – Man City being the other – to have their 100 per cent record in tact, and they got off to a rapid start on the South coast.

In just the fifth minute, summer signing Gabriel Jesus expertly controlled a dropping ball, before turning and driving towards the Bournemouth box. The Brazilian laid it off to compatriot Gabriel Martinelli, and while his shot was straight at the ‘keeper, it was parried straight to the feet of Martin Odegaard, who tapped home from six yards.

Six minutes later and it was two, Bukayo Saka laying the ball off to find the overlapping run of Ben White down the right, before the make-shift right-back picked out the unmarked Odegaard on the penalty spot, the Gunners captain taking a touch before firing past Mark Travers.

Arsenal absolutely dominated proceedings in the first half, enjoying 73 per cent of the ball, though Bournemouth game out with a bit more intent after the interval.

However, after the Cherries’ early improvement, Arsenal would add their third just nine minutes into the second half. Martinelli’s cross from the right evaded everyone to find Granit Xhaka before the Swiss international laid the ball off to William Saliba. The centre-back surprised everyone as he swept home a wonderful first-time, left-footed finish from the edge of the box that looped over the Bournemouth goalkeeper.

Gabriel Jesus thought he had added a fourth for his new side in the 72nd minute, though his effort was ruled out for a marginal offside, as the Gunners ran out 3-0 winners to move to the top of the early Premier League table.

3 – Arsenal are the first top-flight side to win their opening three league matches the season after losing their first three since Everton in 1937-38 and 1938-39, with the Toffees going on to win the title in the latter of those seasons. Harbinger? pic.twitter.com/2V6tZLPFTb

The victory maintains Arsenal’s perfect start, though Mikel Arteta says today’s display was still ‘far’ from being the perfect performance.

“Still far [from perfect],” he told Sky Sports. “We had some strong periods.

“In the second half we conceded too many chances for Bournemouth. I’m proud, it’s not easy to come here and win 3-0 but there are still things to prove.

“We started the game really well. We were dominant and precise. The two goals gave us a lot of confidence.”

Gabriel Jesus has taken to life at the Emirates like a duck to water, and was a threat throughout at the Vitality stadium.

“Jesus was involved in the goals. His contribution to the team was outstanding,” he said.

“He can still improve his level. He’s got a huge desire to be the best.”

Arsenal’s start to this season is in stark contrast to last season when they kicked off with three successive defeats without scoring.

At this point last season, they had conceded 9. 🔁 pic.twitter.com/9uhX89qClE

“Winning makes life completely different. The atmosphere is good. The unity is incredible. Saliba, [the goal was the] last thing I’d expect.

“In life difficult experiences make you stronger and make you learn more than good moments. That moment was painful and we don’t want to go through that again.”

The Spaniard added that he is still hoping to add more new faces to his squad.

“We will try to the end [to sign more players]. The transfer market is tricky. We’d like to do something else. Let’s see what we can do.”