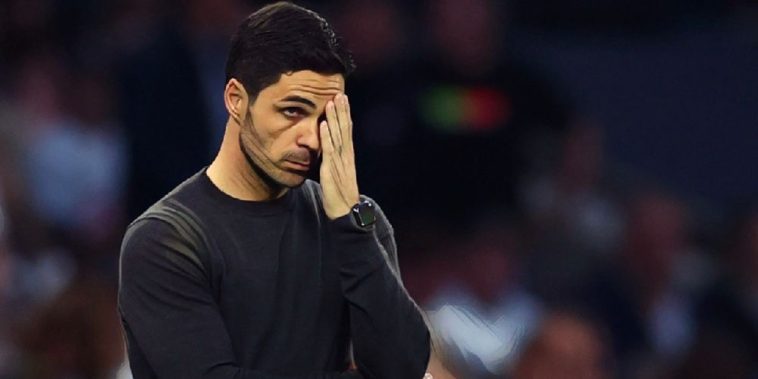 Arsenal’s Champions League dreams look all but over after slipping to a disappointing and underwhelming 2-0 defeat against Newcastle.

Arsenal had missed the chance to confirm a top four finish last week when they were beaten by Spurs in the North London derby, though came into the game knowing that it was still in their hands and a win would move them back into the Champions League places.

It was however Newcastle who started by far the brighter of the two sides, with Eddie Howe’s men quick to win the ball and constantly looking to play it in behind the Gunners’ backline.

The best chance of the first half fell to Allan Saint-Maximin, the Frenchman cutting in off the left before forcing a smart save out of Aaron Ramsdale at his near post.

The Magpies finally got their noses in front 10 minutes into the second half, Joelinton beating Mohamed Elneny for pace down the Arsenal right, before his cross was turned into his own net by Ben White under pressure from the dangerous Callum Wilson.

Mikel Arteta threw on all of his attacking options in a bid to get back into the game, but in truth, they were outworked and outplayed all over the field, and in the 85th minute, Newcastle netted their second. A delicious pass from Sean Longstaff picked out the run of Callum Wilson, and while the Newcastle number nine was closed down quickly by Ramsdale, the ball rolled invitingly to January signing Bruno Guimares who fired home.

Ryan Fraser forced another smart save out of Ramsdale deep into added time as Eddie Howe’s side ran out thoroughly deserving of their three points.

Arsenal in the Premier League since the start of April:

The result now means that Spurs only need a point from their trip to face already relegated Norwich to clinch a top-four finish, and speaking afterwards, Mikel Arteta was unable to hide his disappointment at the manner of his side’s defeat.

“It was a really difficult night to swallow,” Arteta told Sky Sports. “Newcastle deserved to win the match and were much better than us. We had nothing in the game.

“It’s true that we could not cope with the game that we had to play here. We tried to change some things but it didn’t make it better. We had moments where we looked better but then the execution was so poor and the goals we gave away were extremely poor.

“It’s extremely disappointing that Newcastle were 10 times better than us and the performance was nowhere near the level we need to be at if we want to play in the Champions League.

“I am incredibly disappointed. It’s a very painful one. It was in our hands and today it’s not in our hands. We have to beat Everton and wait for Norwich to beat Spurs. There’s always a tiny chance in football.”