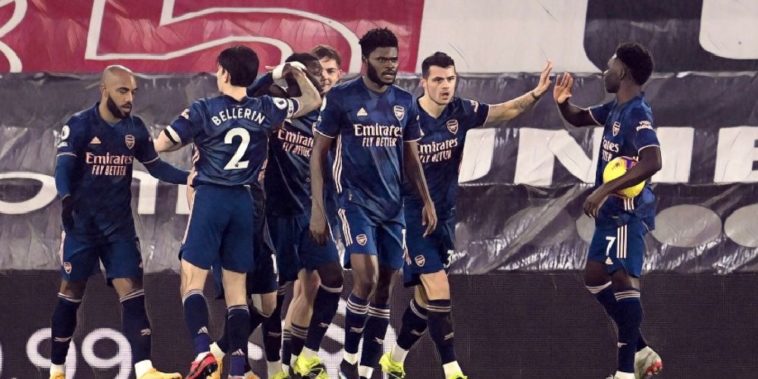 Arsenal moved into the top half of the table with an impressive 3-1 victory over an in-form Southampton side to continue their recent resurgence.

The two sides only met at the weekend, with Southampton running our 1-0 winners to dump Arsenal out of the FA Cup, and it only took them three minutes to open the scoring once again. A wonderful whipped corner from set-piece specialist James Ward-Prowse was met sweetly by Stuart Armstrong who struck the ball first time from around 16 yards to smash it past Bernd Leno in devastating fashion.

The lead would last just five minutes though. Alexandre Lacazette pressed high to win the ball back before Granit Xhaka eventually threaded it through the Saints defence into Nicholas Pepe, who took a touch to beat his man before calmly slotting past Alex McCarthy.

As the game approached the interval, the Gunners went ahead, and Lacazette was involved again as he once more won the ball high up the field. The Arsenal number nine laid it off to the advanced Bukayo Saka, who nipped the ball past the onrushing McCarthy before rolling it into an empty net from the edge of the box.

It was a hugely entertaining game, with both sides having opportunities to score, though it would be the north London outfit who would net again with 18 minutes left to play. Having been involved in the buildup to Arsenal’s first two goals, French striker Lacazette got himself on the scoresheet, poking home at the back post from a low first-time cross from Saka, with former Southampton full-back Cedric having played a sumptuous diagonal to open up his former side.

Speaking to the BBC afterwards, Mikel Arteta said he was delighted with his side’s performance, describing his team as ‘effective’: “They are a really dangerous team when they are in front,” he said. “They are a team that presses and is good in transition but we did a lot of things right.

Since Xmas Day, only Man City have won more points in PL than the 1️⃣6️⃣ the Gunners have achieved pic.twitter.com/oQl5TaqOoL

“There were phases of play we completely dominated and we looked comfortable and scored some good goals because it is complicated to win here.

“We were much better building up and did not put ourselves in trouble. We were cleaner and more effective and when we had to defend deeper we looked comfortable.

“We conceded from a set-piece but I really like the character of the team. To go 1-0 down after what happened a few days ago, the reaction, the confidence, the way they played, it was positive.

“They are a team that is good at building the game really well inside but we recognised the triggers to press.”

Having embarked on a wretched run of form before Christmas that had left some to suggest the Gunners were relegation candidates, they have responded in fine fashion with an unbeaten run of six matches in the Premier League.

“Winning a football game brings confidence,” Arteta said. “We were doing things right but losing games. It is a lot of things.”

Bukayo Saka has been directly involved in six goals in his last six Premier League games.

Putting it on a plate for Lacazette. pic.twitter.com/F5Su1Bepxu

Bukayo Saka and Emile Smith Rowe have earned rave reviews for their performances in recent weeks, with the pair being instrumental in Arsenal’s upturn, and the Spanish coach was once again delighted with their showing on the South Coast.

“They were both magnificent again today,” he added. “They need to keep going – they have a lot of things to learn and improve but they are lucky they have senior players who are giving them advice and pushing them.”

Next up for the Gunners is a home game against Manchester United who came into the midweek fixtures at the top of the table, United’s last defeat coming against Arsenal back on November 1st.