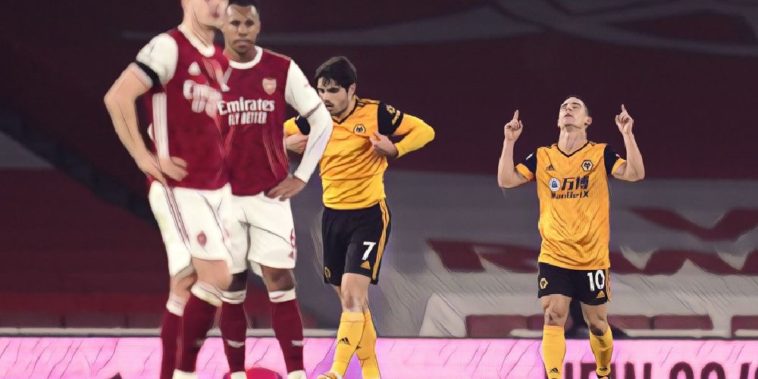 Arsenal’s inconsistent start to the season continued as they slipped to a disappointing 2-1 home defeat to Wolves to remain 14th in the Premier League.

The game started in sad circumstances, with Wolves talisman Raul Jimenez coming off worse in a nasty clash of heads with David Luiz in just the fifth minute, the Mexican being taken straight to hospital for medical check-ups.

The game resumed after a lengthy delay, and despite the worrying injury to their star striker, Wolves reorganised themselves well, and took the lead in the 27th minute. Adama Traore lifted the ball towards Leander Dendoncker at the back post, and while the Belgian saw his header come back off the bar, Pedro Neto followed in on the rebound.

Arsenal quickly got themselves back in the game on the half-hour mark, however, summer signing Gabriel Magalhaes rising highest to head home Willian’s corner.

Parity didn’t last long though, Wolves retaking the lead 12 minutes later after Pedro Neto drove towards the Gunners box unchallenged, and while his shot from the edge of the area was saved by Leno, the rebound again dropped to an opposition player, with Daniel Podence expertly scooping the ball to ride a challenge before tucking home.

Arsenal dominated after the break as the Gunners looked to rescue something from the contest, but failed to get any of their nine second-half efforts on goal, including Pierre-Emerick Aubameyang nodding his close-range header wide of the post with just nine minutes to play.

The result was Arsenal’s third consecutive defeat at the Emirates, and leaves Mikel Arteta’s side 14th in the league, and speaking afterwards, the Spaniard pointed to his side’s inability to convert their chances, the Gunners having only scored 10 goals in their opening 10 league games.

13 – Arsenal’s tally of 13 points is their lowest after their opening 10 matches of a league campaign since the 1981-82 season (12). Collapse. pic.twitter.com/QaZ6olTYXj

“They had two shots on target in the first half and scored twice,” he told BBC Sport. “The team showed a real resilience, togetherness and belief to try to win in the second half. We generated the chances but didn’t score.

“We need more goals to win football matches. We need to keep supporting the players. All players go through [tough] periods. We’re creating chances but struggling to score goals. That’s the difference between winning and losing.

“When you lose matches the confidence goes down because they believe things can happen again. You need to win after a defeat. We’ve been doing this in my time here. This is the first time since we’ve been here [that they’ve had a losing run].”

Next up for the Gunners is a home game against Rapid Wein in the Europa League, before a trip across north London to face rivals Spurs, both games permitted to have up to 2,000 supporters in attendance following the end of national coronavirus restrictions in England.

Asked if his side could turn around their form against their rivals, who go into the game as league leaders, Arteta said that both side’s current situation gave the greatest possible motivation: “It would be great,” he said. “There’s not a bigger motivation than for us to go to Spurs and try to beat them.”