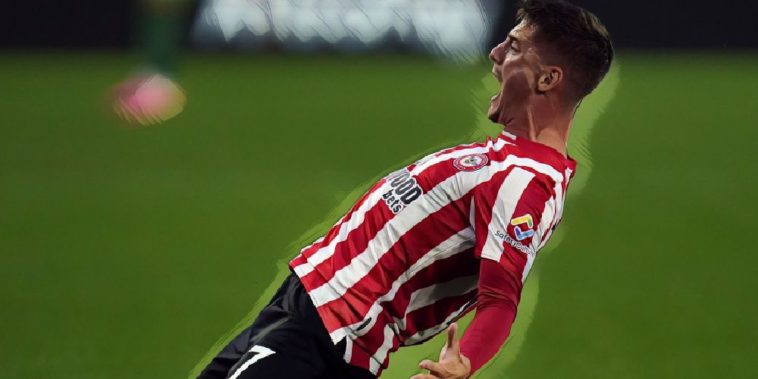 Brentford got their Premier League campaign underway in stunning style, ending their 74-year absence from the top flight with a superb and well earned 2-0 win over Arsenal.

It would be Thomas Franck’s side who had the first real big chance of the game, Bryan Mbeumo latching onto a flick-on by Ivan Toney, only for the Frenchman to crash his effort off the outside of the post.

The Bees would however score the first goal of the new season midway through the first half, Callum Chambers’ poor clearance falling straight to a Red and White striped shirt, Sergi Canos picking up the ball down the left channel, cutting onto his right foot before rifling it home beyond Bernd Leno at his near post.

Mbeumo would have a chance to extend the lead before the interval, though scuffed an effort wide following some sloppy defending from the Gunners.

Arsenal looked more threatening in the early stages of the second half, and having produced a tidy turn, new number 10 Emile Smith Rowe drove at the Brentford backline, only to see his effort palmed away by David Raya.

However, while the Gunners had the more of the ball and chances, their often soft underbelly was exposed once again, a long throw from the left not being dealt with at the near post, with Christian Norgaard steaming in to meet the ball with his head at the back post to put the Premier League newcomers two up.

While Arsenal pressed late on and ended the game with 22 attempts, they rarely looked like troubling Raya, and speaking afterwards Mikel Arteta admitted his side didn’t deserve anything from the game.

“I’m disappointed,” he told the BBC. “We started the season against a good opponent. I don’t think we deserved anything different. They scored from a long throw-in and we didn’t have enough presence in the box.”

Asked if Brentford’s second have been disallowed for a foul on Bernd Leno “It’s allowed in the Premier League. He cannot move. I can’t change it now.

“The first goal gave them some hope. We wanted to play better in the second half but we need many more shots on target, then we conceded on a set-piece.

“A lot of young boys were doing everything they can. For some of them it was the first experience in the league – that says a lot.”

Asked how the lack of his first-choice strike pair of Lacazette and Aubameyang affected his side, the Spaniard didn’t want to use it as an excuse:

“I can’t change that. We knew that before the game. I don’t know [if they’ll be available for the next game].

“What I can control and help, I’ll put all my enthusiasm and work into that.”

Next up for Arsenal in the league are games against Chelsea and Man City, both sides widely considered as the two main contenders to lift the title next May.

Read – Our writers’ Premier League predictions for the 2021/22 season