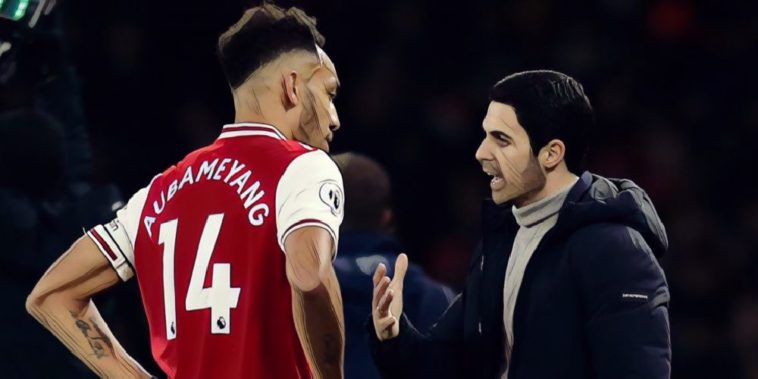 Mikel Arteta has responded to Pierre-Emerick Aubameyang’s comments over the weekend in which he suggested he is at ‘a turning point’ in his career, the Arsenal boss insisting he is ‘positive’ about the strikers future.

The Gabon international’s future has been the subject of increasing speculation, with the suggestion being that the 30-year-old is keen to return to a Champions League club, with Inter Milan, Barcelona and PSG all having been linked in recent months.

The former Dortmund forward has little over a year remaining on his Arsenal contract, and his comments about being at a ‘turning point’ in his career were the topic of conversation at Arteta’s first pre-match press conference ahead of football’s resumption this week.

“I think it’s our responsibility to make him feel that this is the right next step in his career,” Arteta said ahead of Arsenal’s trip to face Man City.

“I think at the moment I am extremely happy about the way he is performing and behaving. I think I have a really good relationship with him where we can discuss face to face a lot of things.

Since Pierre-Emerick Aubameyang made his Premier League debut, only Mohamed Salah (51) has scored more goals in the competition than the Arsenal forward (49).

Pressed further on Aubameyang’s contract situation, the Spaniard insisted he was ‘pretty positive’ about being able to come to an agreement with the prolific striker.

“I think in a different context we would have liked to do things much quicker, but we have been handed really tight with time and communication as well,” he added.

“Obviously these unprecedented times bring a lot of uncertainty. It’s getting clearer and clearer every day that we are a step closer to getting back to playing football and we are going to move forward.

“We have many discussions with Pierre, his family and agent. I am pretty positive that we can find the right agreement for all parties.”

Ahead of the Premier League‘s restart, Arsenal are eight points adrift of fourth-placed Chelsea with a game in hand, and while admitting Champions League football would be a big lure to any player, he is keen to only have ‘happy’ players within his squad.

“I think that would help to persuade anybody, but we are very lucky to have the club that we have right behind us that a lot of players want to come and join us.

“But it is not about who do we want to attract as well, it is how happy the players that are here and how convinced they are that they are in the right place.

“As well, it is our obligation to be fighting for almost every trophy and playing in the Champions League with this club.”

Fabregas: Arteta has a ‘much harder’ job on his hands than Lampard