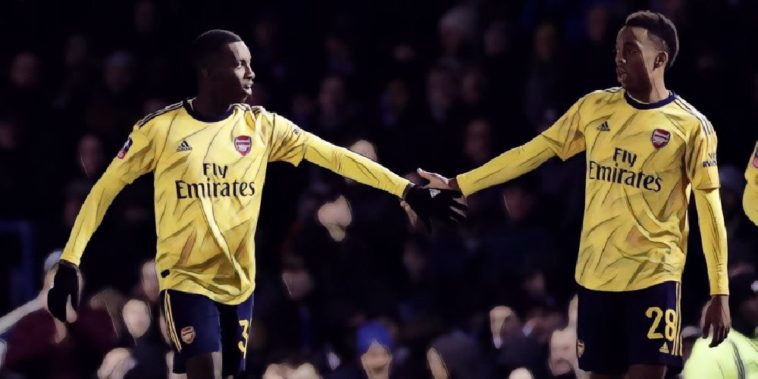 Arsenal became the first team to book their place in the FA Cup quarter-finals with a 2-0 win over 2008 winners, Portsmouth at Fratton Park.

Despite the 37 places separating them in the footballing pyramid, Portsmouth started the fifth round tie the brighter, creating a number of chances in the opening exchanges, though they were unable to get any of their eight first-half shots on target.

In the fifth minute of first-half stoppage time, the League One side were made to pay for their profligacy in front of goal, Arsenal defender Sokratis blasting home from close range following a drilled cross from Reiss Nelson.

Shortly after the interval, Eddie Nketiah beat his man to the near post to get on the end of another Nelson cross before netting from close range to seal the Gunners place in the last eight of the FA Cup.

Having been dumped out of the Europa League by Olympiakos last week, Mikel Arteta was delighted with the response that his side showed following the defeat, picking out ‘special’ Reiss Nelson for praise after he made his first appearance since early January.

“It’s a difficult place to come but I have faith in these kids,” Arteta told BT Sport. “They always respond and I always knew they would do that.

“They have to learn from the difficult moments and manage them but they have the talent and desire and look how hard they work.

“The clean sheet is really important and we defended set-pieces much better.

“We have pace in a few players up front. Reiss [Nelson] is a special player and can eliminate players one on one. He’s been out for a while but he’s back now and he showed what he’s capable of doing.

“I’m really enjoying working with this group of players, It’s a process. I know everything has to be today or yesterday but in football it doesn’t happen like this. I’m seeing a lot of things I’m happy with but there is a lot of room to improve.”