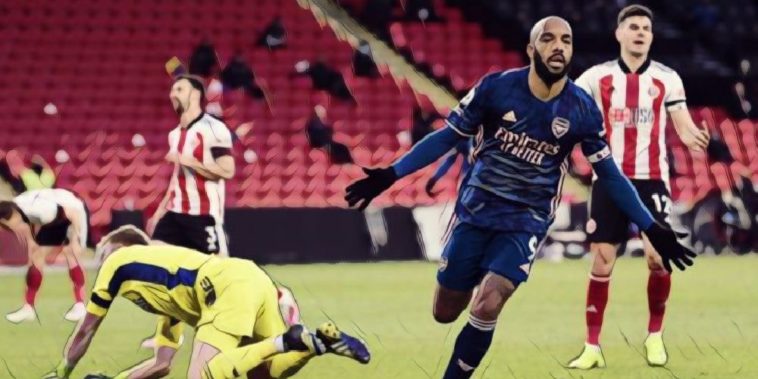 Arsenal got back to winning ways with a comprehensive 3-0 win over a the Premier League’s bottom side Sheffield United.

Arsenal dominated the encounter from the off and played some tidy football along the way, though for all of their good play, they often lacked the end product required during the opening exchanges.

They did, however, take the lead in the 33rd minute, and did so with a slick piece of one-touch play. Lacazette, fed the ball to Saka on the edge of the box, who played a first-time touch to Dani Ceballos. The Spaniard played a sublime backheeled flick to perfectly pick out the run of Lacazette who had continued his run before the Frenchman steered the ball into the bottom corner.

The Gunners would double their lead in the 72nd minute, Nicolas Pepe capitalising on a woeful pass from John Lundstrum, driving into the area and getting a shot away. The Ivorian’s effort was saved by ‘keeper Aaron Ramsdale but parried straight into the path of Gabriel Martinelli who tapped home his first goal since that wonderful solo effort against Chelsea back in January 2020.

The visitors would net a third with five minutes to play, Thomas Partey producing a nice turn on the halfway line before threading the ball forward in behind the Sheffield United defence. Lacazette raced onto the ball, gave Ramsdale the eyes before sending him the wrong way from just inside the area.

Speaking after the game, Arteta was pleased with his side’s efficiency and cohesion after what has been an inconsistent season for his side.

“I am really happy with the way we played, we scored some really nice goals and controlled the game the way we wanted,” he told BT Sport. “We played at a high level. From the start I felt the boys were at it, we were efficient and I had a good feeling.

“We had a good cohesion around the team, good distances to play with each other and they understood very good the spaces. Overall happy with the win.”

There was, however, a blow for Arsenal with Bukayo Saka being forced to be replaced and seen strapping a bag of ice to his thigh, leaving the Spaniard hoping for the best for the talented youngster, though he did allay fears over Martinelli who struggled with an ankle injury.

“He had some discomfort in his thigh,” he said of Saka. “I don’t know what it is. The last thing we need is another injury to an attacking midfielder or a winger because we have enough of that. Gabriel Martinelli twisted his ankle when he landed. It was pretty sore but he’s a tough boy.”

Arteta was also pleased with the performance of Lacazette following his Bramall Lane brace, saying the game was ‘ideal preparation’ for Thursday’s second leg against Slavia Prague.

“Against Prague, Lacazette missed two big chances and he needed those goals. We played him today because of that and because he has been playing well. Really happy for him. He had a really good performance, and on top of that, he put two goals away.

“This is ideal preparation for Thursday. It has been a long run without a clean sheet. For the stability of the team and for the spirit, it is great before Thursday.”