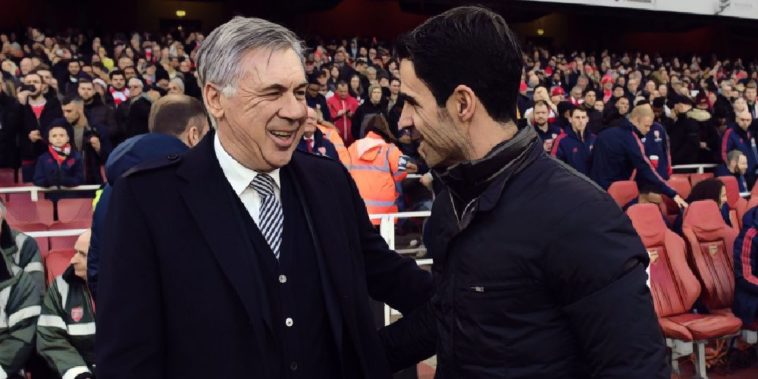 Mikel Arteta is expecting a ‘tough’ game against former side Everton this weekend and has recalled his ‘seven incredible years’ with the club as a player.

Arsenal travel to face Everton this weekend in a crucial clash for the struggling side, the north Londoners without a win in their past six Premier League fixtures and just five points above the division’s relegation places.

Their stuttering start has been the club’s worst-ever start to a Premier League season, whilst their tally of 14 points from 13 fixtures is Arsenal’s worst start to any campaign in 46 years.

Arteta’s position at the Emirates has come under increasing pressure following the Gunners’ toils so far this season, and the Spaniard will be seeking a positive result at the familiar surroundings of Goodison Park.

Arteta spent seven seasons on Merseyside as a player and helped the club to a top four finish and Champions League qualification during his time with the Toffees, and the Arsenal boss has reflected on his time with the club ahead of a ‘tough’ encounter against Carlo Ancelotti’s side tomorrow.

“It is always really tough to go to Goodison, I played there and know them really well,” he said at his pre-match press conference.

“They are teams in two different moments but we are preparing the game to go there and beat them, because we need a result.

“I had seven incredible years there, they treated me incredibly well, we were very successful for the team and the results that we had in the moment, and I still have a lot of love, admiration and friends over there because I am grateful they treated me really well and I really enjoyed being part of their family.”