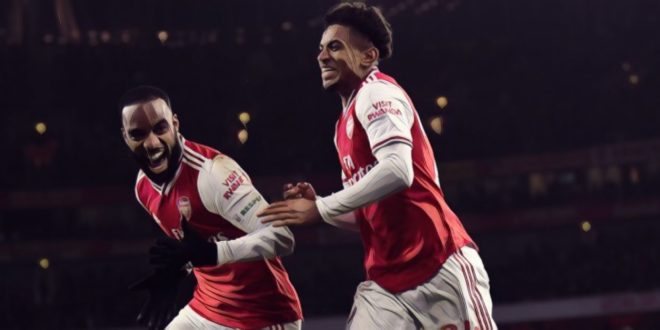 Mikel Arteta’s Arsenal have progressed to the fourth round of the FA Cup after beating Championship leaders Leeds United 1-0 in an entertaining encounter at the Emirates tonight.

Arsenal would come into the game on a high after beating Manchester United 2-0 on New Year’s Day, but it would be Marcelo Bielsa’s Leeds side who would dominate the opening half, with the visitors unfortunate not to take the lead having registered a whopping 15 shots in the first 45 minutes.

However, Arsenal would look a different side during the second period, wrestling back control of the game and their pressure would tell in the 55th minute when young attacker Reiss Nelson fumbled the ball home from close range.

Despite being pleased with the win Arteta revealed afterwards just how unhappy he was with his sides first-half display.

“Now I’m really pleased but we saw two different teams from the first to second half,” Arteta told the BBC.

Arsenal have now won more games across all competitions after six days in January (2) than they managed in November and December combined (1).

”I tried to tell them exactly what they were going to face and after 32 minutes we had won one duel, I think. We changed our attitude, desire and organisation at half-time and then we were completely different.

“They had to experience how hard and tough it was going to be. I watched a lot of Leeds games and they battered every team every three days. It was good for my players to learn and to suffer on the pitch.”

Also speaking afterwards the Gunners French striker Alexandre Lacazette admitted Arteta had laid into his players during the half-time break:

“The manager shouted a lot. He was not happy because we knew they’d play like this and we didn’t respect what he had said.”

Arsenal return to Premier League duty this Saturday, when they travel across London to face Crystal Palace.

Read: FA Cup Third Round: Team of the Week